Tanjore: In the village of Kalimedu near Thanjavur, the Chithrai festival procession for the apper gurupuja is usually held from 12 midnight till early morning.

In this context, on the evening of the 94th Chithrai Festival at the Kalimedu apper temple, the festival was held with much fanfare last night. The chariot was brought through various streets in the clay area.

At around 3 am in the morning, when the chariot came to a halt on Puthalur Road in Kalimedu area, the chariot was electrocuted by a high voltage wire. Ten people, including two boys, died at the same spot. Also, more than 10 were seriously injured.

In this case, one of the patients was admitted to the intensive care unit and died without treatment. As a result, the death toll from the power outage at the chariot festival has risen to 11. 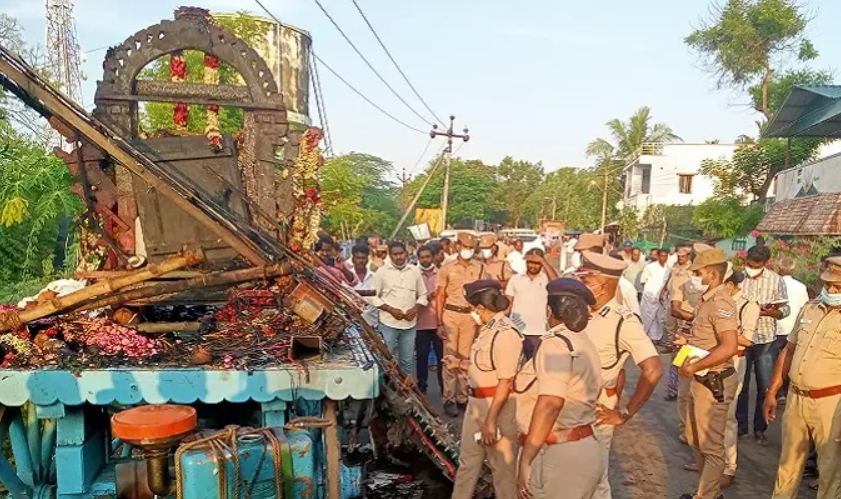 Chief Minister MK Stalin will go to the Kalimedu village

In this context, Chief Minister MK Stalin will go to the Kalimedu village at 11 am today where the chariot festival accident took place. It has been reported that he will meet the families of the victims in person and offer his condolences.

Also, the chief minister has announced a relief of Rs 5 lakh each to the families of the victims of the Tanjore chariot festival accident. Tamil Nadu Chief Minister MK Stalin was deeply saddened to hear the tragic news of the death of 11 people in a Thaer theruvila accident. He said, “I have ordered the district administration to provide special treatment to the 15 people injured in this accident.” He also said that he has ordered expedite the rescue operations at the scene of the accident.

Stay tuned to know more news in and around Tamil Nadu.