Karan Johar has invited to host the 2.0 FirstLook event. King Khan/Badshaah of Bollywood Shah Rukh Khan and Ulaganayagan Kamal Haasan are expected to be the part of the event today on November 20. 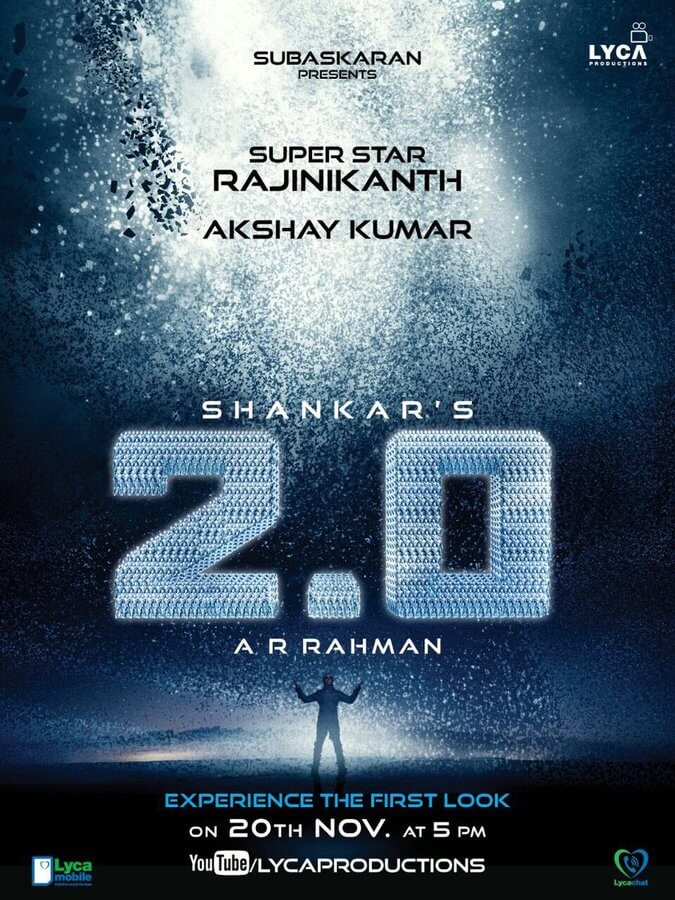 The Title Poster of 2.0 aka Endhiran / Robot 2 has launched by Superstar Rajinikanth on 16th November. The First Poster has created a huge buzz for the First Look event. The posts showed Rajinikanth forming the Movie title while Akshay Kumar in the bottom with the Negative Crow look.

2.0 launch is scheduled today on November 20th, 5:00 PM (11:30 AM GMT) at Yash Raj Studio, Mumbai. Rajinikanth was spotted at Mumbai Airport who came for the first look launch. Wizcraft, an event management company, is organizing the event, and the makers have spent 5 Crore rupee for making the event grand.

The event will have Director Shankar, Actor Superstar Rajinikanth, Akshay Kumar, Academy Award winner A R Rahman and other casts of Endhiran 2.0. Shahenshah of Bollywood, Amitabh Bachan also a very close friend of Rajini will also be present at the event. Makers of 2.0/Endhiran 2/ Robot 2 have made all the possible arrangements to make the event reach everyone.

Where to watch 2.0 Live Streaming Online?

Expected Date of Release of Endhiran 2.0: There is no official date confirmation by the makers of the movie. We can expect it at today’s First look poster.

It is another biggest Indian film which as made with the budget of Rs 350 Crore. Directed by Shankar, Endhiran 2.0 will release in Diwali 2017. The movie stars Superstar Rajinikanth, Bollywood’s Khiladi, Akshay Kumar and Amy Jackson. A R Rahaman who composed the first version of Endhiran/Robot is continuing with the music of Endhiran 2.0.