The movie has got positive reviews from the first show itself and it is said to be a good family Sci-Fi movie. 24 movie is about Time travel. The complete review and story of the movie are updated below. Scroll down to check out the review, rating, story, public talk of the movie 24. 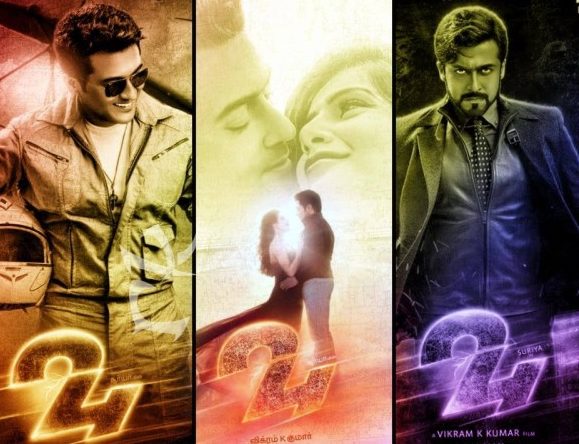 24 Movie is directed by Vikram Kumar whose previous movie Manam was well appreciated and also won him Best Director at Filmfare awards 2014. 24 Movie is produced by Suriya Himself under the banner of 2D Entertainment. Along with Suriya, Nithya Menon and Samantha in the lead roles, the movie also stars Girish Karnad, Ajay, Saranya Ponvannan, Sathyan, Mohan V. Raman in important roles.

Oscar Winning Music Director A R Rahman has composed music for the film and the lyrics are penned by Vairamuthu and Madhan Karky. Check out the 24 Movie review and rating below.

24 Movie is based on time. Suriya Plays triple role in the movie with five appearances. One roles is of an antagonist, five to six looks is designed for him. The antagonist character “Athreya” is a wicked, smart guy who goes to any heights to fulfill his desires. Characters played by Samantha and Nithya in the film are of contrasting nature were both play love interest opposite Suriya. Saranya Ponvannan plays the role of a mother to one of the characters of Suriya in the film.

24, the movie is a family entertainment having the plot on the time period. Actor Suriya is plotting three roles as Surya, Surya’s Son and the antagonist. The actor develops a Time watch/machines which take him to the old time where he changes the mistakes he had made earlier. But, ultimately he has to face many new problems. How is comes back to the new era, what are the problems he faces. All these questions will be answered once you watch the movie.

24 Movie songs have been composed by Oscar-wining Music Director A R Rahman and lyrics are written by Vairamuthu and Madhan Karky.

Taran Adarsh tweeted: Now watching an exclusive screening of Suriya's much-awaited Tamil film #24Movie [with English subtitles].
It requires courage, conviction, command over the medium and of course, financial strength to bring to life a film like #24TheMovie…
#24TheMovie grabs your attention from the titles itself and for the next 2.40 hours you're hooked on to this terrific roller coaster ride…
Biggest strength of #24TheMovie is its concept. It also packs loads of entertainment and unpredictable twists and turns that win you over…
High points: Dramatic start, cute light moments [Suriya-Samantha], fab interval point, emotional moments, the culmination #24TheMovie
Vikram Kumar, who directed the terrific #Manam [Telugu], displays his mastery yet again. He handles the subject with brilliance #24TheMovie
Suriya, in triple roles this time, delivers an award-worthy, knockout performance. He's stupendous as the evil antagonist #24TheMovie
#24TheMovie is not just a good looking film, but has lots to offer. Kudos to the team for pulling off the subject with elan!

Haricharan Pudipeddi posted: Glowing review for #24TheMovie from Taran Adarsh. This is a very good sign. All set for grand release tomorrow.

Thinkal Menon:#24TheMovie @Suriya_offl back with a bang. Proves again why he's the best in his generation when it comes to effortless performance
#24TheMovie romance, sentiments, villain role – his on screen acts r a treat, coupled with top notch screenplay, great visuals n superb CG
#24TheMovie VikramKumar Kumar pulls of a complicated script again. One of the best high budget films with an unusual story in Tamil
#24TheMovie @Samanthaprabhu2 and #Nithya looked like a million bucks with substantial roles. Good chemistry with @Suriya_offl @2D_ENTPVTLTD

Surya Starrer 24 Movie is a complete entertainer with Sci-Fi plot. Surya acts very well in the movie and the plot supports the movie completely.