Whether it is a run, a four or even a wicket, everything in the field of cricket gets the fans cheering, but nothing brings about a smile to their face than a shot that is way up in the air, and sails over the boundary for a massive six. If you remember the six sixes hit by Yuvraj Singh to Stuart Broad during ICC World T20 in 2007, you would be aware of the excitement, and the cheer from every corner of the stadium and your home during the over that helped India put forth a good total of 218 against their opponents England.

While this happened in T20, a lot of sixes have been hit during the ICC World Cup by Indians that really brought the fans on their feet. Here are three of the most notable mentions:

Sourav Ganguly was in great form during the 1999 ICC World Cup, and as the team had lost the previous two matches, against South Africa and Zimbabwe, the Indian side was under tremendous pressure to win every match to stay in the game. It was the match against Sri Lanka on May 26th at Taunton where India was asked to bat first, after losing the toss. The 183 runs by Sourav and the highest-partnership in the history of the game, until then of 318 runs with Rahul Dravid helped the team win the match by 157 runs. Although the team couldn’t reach the finals, their performance until Super Six Stage was phenomenal, and no one could forget the six against world’s best off-spinner Muttiah Muralitharan straight over the sightscreen and right at the famous Ian Botham stand from his list of seven sixes during the match. 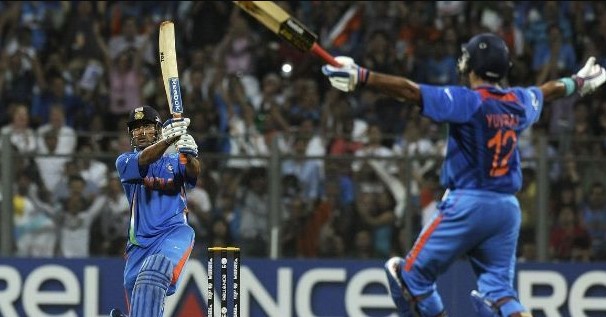 When you play against your arch rival, Pakistan, two things are bound to happen. Your performance becomes the talk of the town, and the match draws more audience and attention than the World Cup Final. Back in the day, Pakistan put forth 273, and it was a fitting total until Sachin Tendulkar and Virender Sehwag made their way to the crease to start their onslaught. Sachin’s six over point against Shoaib Akhtar became the talk of the town, and it was his amazing work that helped him get awarded the Man Of The Match Trophy. The team couldn’t win the final against Australia during the world cup.

It was the night of the finals, and India was up against Sri Lanka, at Wankhede Stadium in Mumbai. The match was all in readiness as Sri Lanka scored 272 runs, and with India losing the openers Virender Sehwag and Sachin Tendulkar to Lasith Malinga, India were 31/2 in just the 7th over. MS Dhoni promoted himself after a decent partnership of 83 runs between Gautam Gambhir and Virat Kohli and ensured that the team wins the trophy after 28 years due to the massive six over long on, at the night of the finals.

How to Stop a Toothache and Get Out of Pain Fast

How to Stop a Toothache and Get Out of Pain Fast