Afghanistan vs  Zimbabwe, the ninth Qualifier match of ICC World T20 2016 will start at 15:00 IST (09:30 GMT) at Vidharba Cricket Association Stadium, Nagpur, India on March 12, 2015 (Saturday). After two wins each, both teams going to face each other. Were Zimbabwe never beats the Afghanistan as of four International T20Is. Also, both teams are wins the last four matches; two matches are in this ICC T20 World Cup 2016 respectively.

Update: Afghanistan won the toss and chose to bat

Man of the Match: Mohammad Nabi 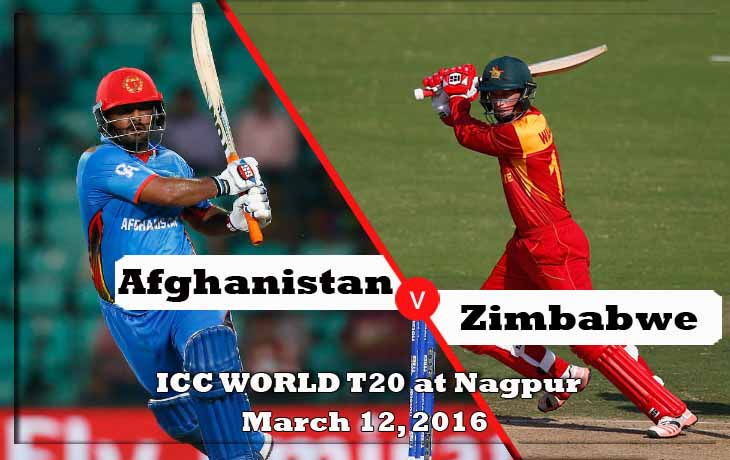 In Match 2 ICC T20 World Cup 2016: Afghanistan beats Scotland by 14 runs. In that game, the wicket-keeper and an opening batsman who scored the highest run as 61 off 39 balls with three sixes. Also, the skipper of Afghanistan, Asghar Stanikzai scored 55 and withstood until the end of the innings. Rashid Khan picks two wickets for his team. The team totally picked five wickets of Scotland and scored 170 runs as total.

In Match 6 ICC T20 World Cup 2016: Afghanistan beats Hong Kong by six wickets. The games started with the batting of Hong Kong. The 31 years age of all-rounder Mohammad Nabi picked Four wickets as highest and also bat in the third order but scored 17 runs. The same opener, who scored 61 runs against Scotland is proved again with this match; Mohammad Shahzad scored 41 runs with two sixes, and the team won the game in 18th over by scored 119.

In Match 1 ICC T20 World Cup 2016: Zimbabwe won the match by 14 runs against with Hong Kong. The team opening batsman, Vusumuzi Sibanda and the all-rounder, Elton Chigumbra are scored Partnership of 61 runs. It makes the team reach the total score of 158. Tendai Chatara and Donald Tiripano are took two wickets each.

In Match 5 ICC T20 World Cup 2016: Zimbabwe won the match against with Scotland by 11 runs. Who completed 23 T20 International matches as of now, Sean Williams is the highest scorer of the game. The Captain who picked four wickets by giving just 23 runs. The team scored the total runs as 147.