AIADMK Election Manifesto 2016: The Upcoming Tamil Nadu State Legislative Assembly Election 2016 is to be conducted on May 16, 2016 for all the 234 assembly constituencies. The All India Anna Dravida Munnetra Kazhagam (AIADMK) had a plan to face this TN election 2016 with the 227 seats. The remaining 7 seats will be shared by their alliance parties. 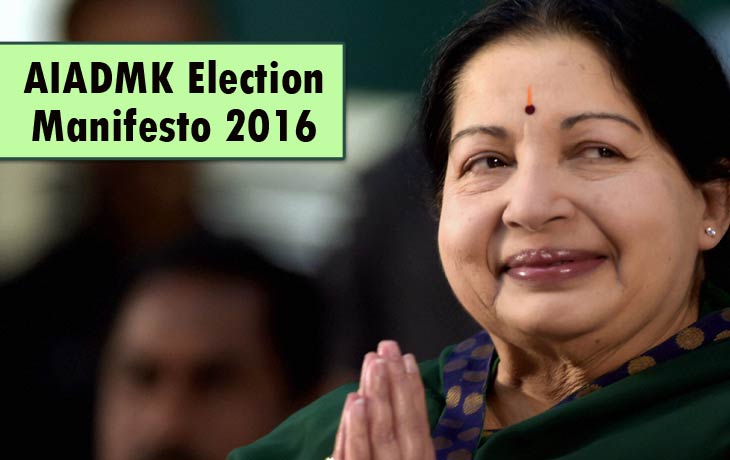 We all know that all other parties are announced their Manifesto for their 2016 election and also they are already started their campaign with their promises.

Aavin milk to provide for Rs. 25 per liter.

Education loans to be paid by government who are still unemployed.

No FDI in retail.

Waiver of all farm loans.

All Ration Card holders to get co-optex coupons worth Rs. 500 for Pongal Festival.

Saperate Housing for all fisherfolks.

Women to buy mopeds of scooties with 50% subsidy.

Poor people to get Amma Banking Card to avail all government services.

Relief for the people of fisherfolk to be increased to Rs. 5000.

Master Health Check-up’s and Women special check p to be expended to all districts.

Free Laptops will be continue with Free Internet for 10th and 12th Students.

For More Details about AIADMK as upto date, Visit www.aiadmk.com