Update: Australia won the toss and chose to bowl 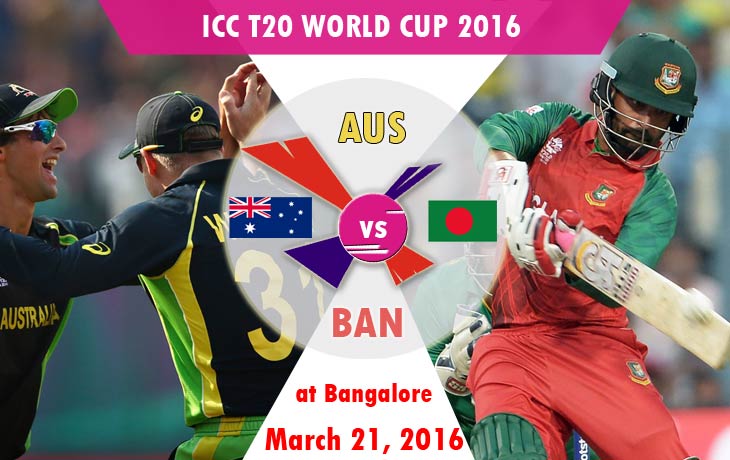 Both of the team, Australia and Bangladesh lost their last matches against with NewZealand and Pakistan by 8 and 55 runs respectively. It is the second match for today’s team on Super 10.

In Bangladesh, Taskin Ahmed and Arafat Sunny are banned for the illegal bowling as they over wheeled apart from allowed hands position on the angle of degree. It is one of toughest loss for the team, Bangladesh. There is a man for all of the team, who carry the match in critical situations like a Root and Kholi. In Australia, Smith takes like that, and he needs to improve lots on his T20 batting mode.

On the Match 14, Bangladesh vs Pakistan: Where Pakistan won the toss and also the match with the score of 201. Taskin Ahmed and Arafat Sunny are took two wickets each, but both of them will be absent in today’s match as we all known one. The all-rounder, Shakib Al Hasan played well as scored 50 runs for his team without leaving the ground on the full innings. Sabbir Rahman used his as good but he allowed to bowl only 12 balls, with that he took a wicket and also just giving 11 runs included one four.

On the Match 17, Australia vs NewZealand: Here also same, a team won the toss and the match. NewZealand scored 142 runs with the help of opening scores. Australia played the second innings. Usman Khawaja scored 38 runs as an individual highest score of the innings. Apart from Usman, Maxwell and Marsh slightly scored 22, and 24 runs on the middle batting line-up. Maxwell also did well on his bowling by picked two wickets by giving 18 runs. As a ditto, James Faulkner also took two wickets for 18 runs. There would be some mashup on Australian batting order if they arranged well mean, they may succeed the match. We need to wait for today’s game, as many of prediction are today’s match is for Aus. On last three meeting with those team, Australia have won all the matches is the notable pin.