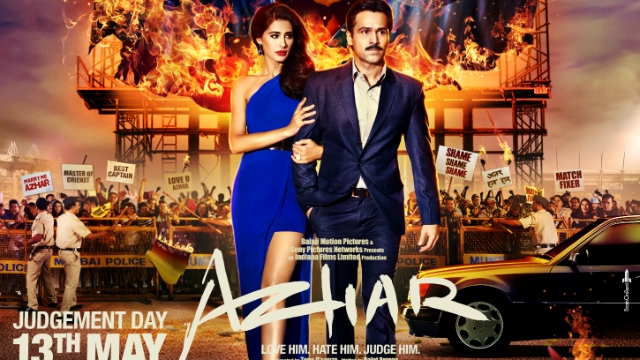 Azhar movie is produced by Ekta Kapoor under the banners of Balaji Motion Pictures and is directed by Tony D Souza. Rajat Aroraa has written the screenplay for the movie and Sameer Hashmi has penned the story. The movie stars include Emraan Hashmi and Prachi Desai, Nargis Fakhri, Huma Qureshi, Gautham Gulati, Kunaal Roy Kapoor, Manjot Singh. The music is composed by Pritam. The movie has released on May 13, 2016.

“Azhar” starring Emraan Hashmi has opened up well with a mixed response from critics. Emraan has impressed with his acting, but the plot seems to not have impressed the critics.

Azhar is a biopic based on the life of former Indian International cricket Team Captain Mohammad Azharuddin, features Emraan as Azharuddin. Actress Prachi Desai plays the role of his wife named Naureen while Nargis Fakhri also plays the role of his second wife Sangeeta Bijlani. The movie is a complete Sports Drama with Politics involved in Cricket. The movie shows the rise of Captain as well as the fall of him because of Match Fixing cases registered against him.

Born to a Hyderabad based family, Young Azharuddin is convinced by his grandfather that he will become a great cricketer. Later, Azhar comes a brilliant batsman and India’s high run-scorer.

Once he is on professional life track, He meets Naureen played by Prachi Desai, for an arrange marriage. Soon they get married and his cricketing career keeps soaring.

On a tour to London, Azhar meets the Hindi cinema’s famed beauty Sangeeta played by Nargis Fakhri. The duo fall in love and he soon announces to the world about his relation by dedicating her his Man of the match award to her.

Then starts the downfall of Azhar when he is pulled into a match fixing. Later, an 8 year battle at the Indian court challenging the decision over life ban on cricket is what we can see.

Manjusha Radhakrishnan says: “If you are expecting Hashmi to deliver a captain’s innings here, then you are looking up the wrong film. However, if you are in the mood for a salacious potboiler that buries the real problem then Azhar may work for you.”

Meena Iyer says: “Emraan bears no physical resemblance to Azharuddin. However his mannerisms—the blinking of his eyes and swagger add to a knockout performance.”