Emraan Hashmi’s Azhar Movie Trailer released: Emran Hashmi starrer Azhar movie trailer has been released. The most expected movie Azhar trailer has been revealed with a positive response from the audience. Azhar is a sports movie is being directed by Tony D Souza. Emran Hashmi will portray the role of former Indian Cricket Team Captian Mohammad Azharuddin.

The cricketer was said to be involved in match-fixing scandal 2000 which led to lifetime ban imposed by Board of Control for Cricket in India (BCCI). On 8 November 2012, the Andhra Pradesh High Court lifted the ban, describing it as “unsustainable”. Nowadays, Biopics has become a trending inspiration in Hindi Film Industry which has ultimately become the huge box office hit, in the list we can expect Emran Hashmi’s Azhar movie. Scroll down to know more about Azhar movie release date, audio release and more. 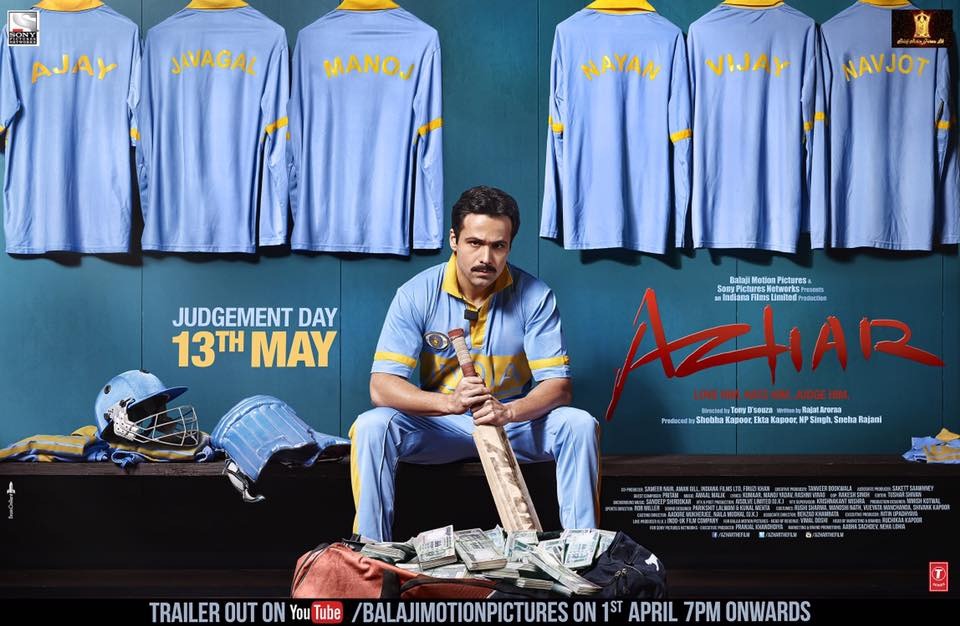 Within few hours of release, the trailer has got very good hits in youtube and the audience is eager for the movie release. The trailer shows the Rise and Fall of the former Indian Cricketer Mohammad Azharuddin. The Movie includes Prachi Desai as Azhar’s first wife and Nargis Fakhri. Catch the latest Azhar movie Trailer here.

The Azhar Movie’s First look was released earlier. The first look has already created a lot of curiosity among the viewers because of the plot. The movie is slated to release on March 13th, 2016.

Azhar movie is directed by Tony D Souza and is produced by Ekta Kapoor under the banners of Balaji Motion Pictures. Rajat Aroraa has written the screenplay for the movie and Sameer Hashmi has penned the story. The movie stars include Emraan Hashmi and Prachi Desai along with Nargis Fakhri, Huma Qureshi, Gautham Gulati, Kunaal Roy Kapoor, Manjot Singh. The music part is handled by Pritam. The movie will hit the silver screen on May 13, 2016.