Bairavaa Release Date Confirmed: The maker have officially confirmed the release date of Ilayathalapathi Vijay's Bairavaa. The latest action film by Bharathan will be released on January 12, 2016. The film has censored with the “U” certificate. The fans are celebrating this grand news via Twitter India. The hashtag of #BairavaaFromJan12 is trending at first position on Twitter India around 08:00 PM on January 03, Tuesday. Check the Latest poster with the Bairavaa Release Date here below.

Bairavaa Release Date & Censored as “U” 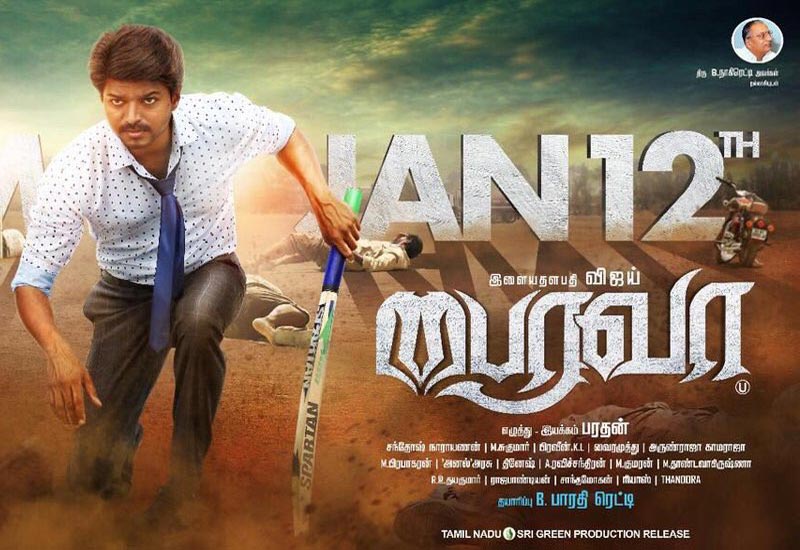 Sri Green Production will release the film in Tamil Nadu. The film has produced by B. Bharathi Reddy under the banner of Vijaya Production. The film story has penned and directed by the Aalagiya Tamil Magan director Bharathan. Recently, the Sun TV has telecasted the making of Bairavaa on New Year 2017. Also, the maker officially launched the Bairavaa Trailer on December 31st night. The Bairavaa trailer created massive records within an hour on Views and Likes.

Santhosh Narayanan is the Music composer of this film. Praveen K.L is the editor of this movie. M. Sukumar is the director of Photography. Viramuthu has penned four songs for Ilayathalapathy Vijay' Bairavaa. Arunraj Kamaraj's vocal and his words are making the record again for Vijay also after the Superstar Rajinikanth's Kabali.

The Bairavaa Release Date is January 12, 2016 (Thursday). Also, check other Tamil Films, which all release along with Ilayathalapathy Vijay's Bairavaa.