Bairavaa Track List: As per the earlier announcement by the Lahari Music, the tracklist titles will announce as each per day. But, the Bairavaa music rights owned company has suddenly launched the tracklist video at this evening. Also, the music director of Bairavaa, Santhosh Narayanan tweeted that “Here is the full track list of #Bairavaa. We had immense fun working on this soundtrack and greatly honored to be a part of the movie.”

According to the source, there is no audio launch function for the Ilayathalapathy Vijay's Bairavaa. The Legendary Lyricist Vairamuthu sir penned four songs on the Bairavaa album. The Lahari Music has tweeted early as the “Azhagiya Soodana Poovey” as first track in this morning. But, here the “Pattaya Kelappu” song is standing as first in the list. Out of five songs, Vairamuthu has written four for Vijay's Bairavaa. 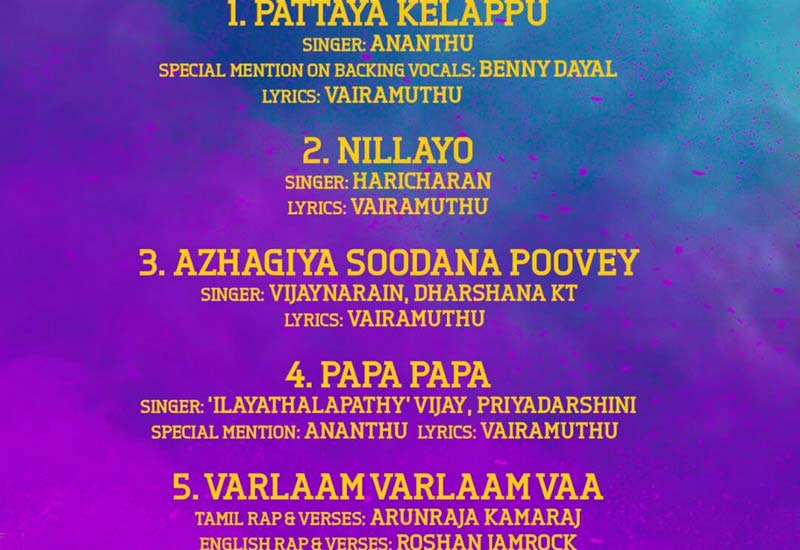 Keerthy Suresh is the female lead of this film. Acor Sathish is the friend of the male lead. Apart from Keerthy Suresh, Aparna Vinod and Papri Ghosh in the female roles. Director Bharathan has made this film with the financial help of Vijaya Productions. M Sukumar is the cinematographer of Bairavaa and Praveen KL is the editor of the film.