Bairavaa worldwide Pre-release business: The Kollywood Superstar and Ilayathalapathy Vijay is ready to appear on the Big Screens Tomorrow 4 AM. The fans of Thalapathy Vijay are all willing to welcome with rich colors. However, the Bharathan directional Action romantic film has collected good revenue on various rights of the latest Vijay’s film. The Bairavaa pre-release business stands more than Rs 85 crore.

Additionally, the Television rights of Kerala, Karnataka, TV and other various deals added few crore such as Rs 30 crore. Whereas, the Bairavaa Telugu dubbing rights are not yet in the talk. It may happen after the release of Tamil (Original) version. Moreover, the Telugu rights for Vijay’s films are sold to Telugu states for over Rs 5 crore. 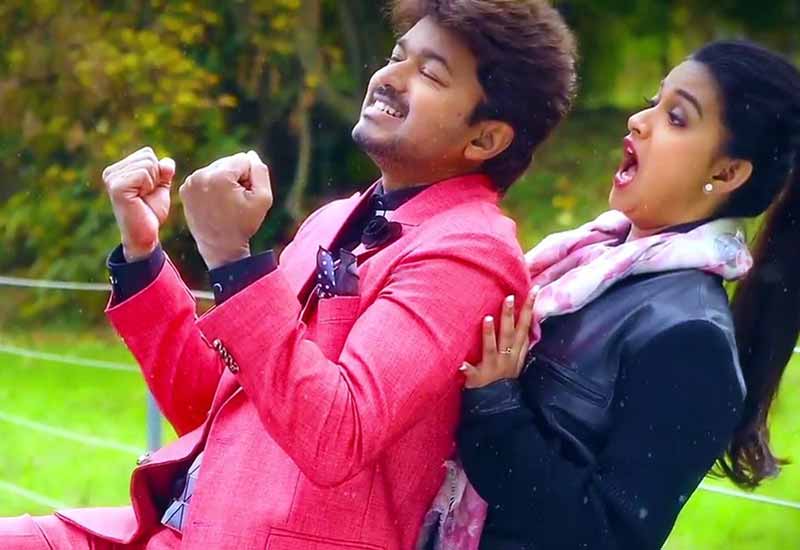 Ilayathalapathy Vijay’s Theri is the most important film in his career, which made the major role in its pre-release business. The Tamil Nadu theatrical rights of the film acquired by the Sri Green Productions. The distribution price is selected based on the success of Vijay’s last film. The film should earn Rs 75 crore in the Tamil Nadu Box Office to hit the records.

The makers were releasing the film at the correct spot on January 12. Hence, the weekend had 4-days of local holidays. Meanwhile, there is an issue with the cultural festival in Tamil Nadu. Most of the Youngsters are had more interest about Jallikattu.

However, in the state of Karnataka, most of the Telugu and Hindi films are dominated the Theaters. Chiranjeevi’s Khaidi No 150, Balakrishna’s Gautamiputra Satakarni, and Hindi film Ok Jaanu are occupied more screens. In Kerala, there is a confusion and standoff between producers council and distributors council. Even though, Ilayathalapathy Vijay’s Bairavaa is releasing over 55 countries around the worldwide. Also, the new addition is the African countries to the list as every in Tamil Cinema.