Bangladesh vs Ireland, the eighth Qualifier match of ICC World T20 2016 will start at 19:30 IST (14:00 GMT) at HPCA Stadium, Dharamsala, India on March 11, 2015. The stars of Bangladesh, Tamim Iqbal, Soumya Sarkar and Sabbir Rahman, are performed well of their last few matches and showcased their skills on T20Is. It may continue upcoming matches for their success. Ireland takes an experience on Dharamsala ground late evening. Netherland Vs Oman was called off due to rain on this same ground is a markable pin.

Update: Ireland won the toss and chose to field 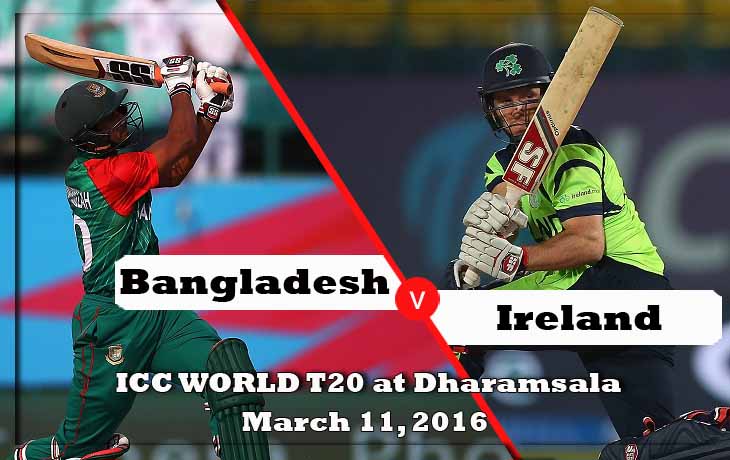 If Shakib Al Hasan scored 21 runs in this match means, he is the first batsman in Bangladesh to scored 1,000 runs in T20 Internationals. The best opener of Bangladesh, Tamim Iqbal need 58 runs to pick that same goal. He is the Player of the match in last played game against with Netherlands, he scored 83 runs off 58 with 3 sixes. Shakib Al Hasan and Al-Amin Hossain took two wickets each.

Ireland lost their last match against with Oman by two wickets. Even though Gray Wilson bats well and scored 38 runs and the opening batsman William Porterfield, Paul Stirling; both scored equally as 29 runs. On Bowling, Kevin O’Brien, Andy McBrine, and Max Sorensen are picked two wickets each.