Bangladesh vs UAE will play Match 3 of the Asia Cup T20 match on February 26, 2016 (Friday) in Mirpur at 07:00 PM IST. UAE needs to play their second game without any rest like as back to back days. Yesterday they had the match against Srilanka and lost the match by 14 runs. Bangladesh lost their Three International T20 matches continuously, and UAE won three games out of their recent four T20 International matches.

Man of the Match: Mahmudullah (Bangladesh) 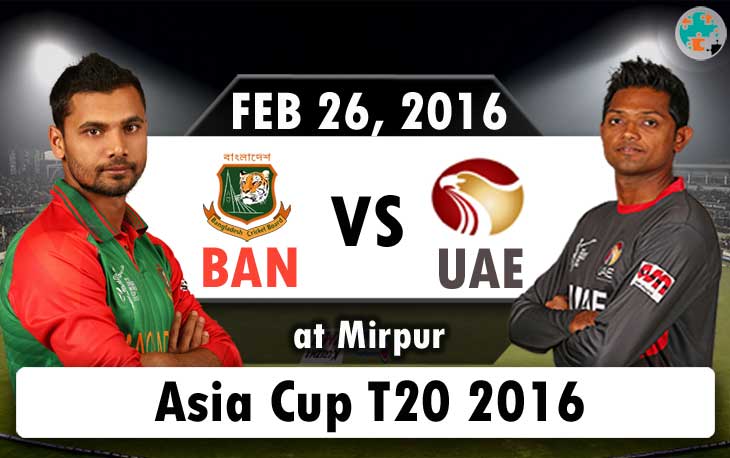 Bangladesh and UAE both the teams lost their Asia Cup matches against India and Srilanka on their first match respectively. Even though, both the team played well in their last matches, especially, UAE tried their best until the end of the match (20th over, 14 runs) and scored 115 runs with Swapnil Patil’s best score of 37. Because of they’re little careless, they lost their match with Srilanka by 14 runs. UAE controls the opponent by their bowling very well and as well as with their fiery fielding. The Captain of UAE, Amjad Javed took three wickets and gave just 25 runs of his Four over.

However, Bangladesh is playing their match at their native green ground under their crowd fans. This is the biggest advantage for them. Also, Bangladesh will note many things about their opponent, UAE. If Bangladesh bat first, they should reach the score 160 and above for their mental boost for upcoming big challenges with Srilanka and Pakistan. We are all known about the UAE’s bowling powers. They already smashed the middle order of Srilanka line-up and made fear on Srilankan faces.

Both the teams will under immense pressure to register their first win in this series.

In their first Match against India, Sabbir Rahman scored 44 runs out of 32 balls with two fours and two sixes for his team, and he was caught by M S Dhoni. Al-Amin Hossain took three wickets by giving five fours and 1 six. Other bowlers Mashrafe Mortaza, Mahmudullah and Shakib Al Hasan are took one wickets each.

Bangladesh captain Mashrafe Mortaza planned to defeat UAE by their professional play with the help of UAE’s video clips.

In their first match, UAE’s Swapnil Patil scored 37 runs out of 36 balls with three fours and two sixes. And the top line-up batman’s made a huge disappointment. Amjad Javed took three wickets and gave a boost to their bowling performance. Mohammad Shahzad, Mohammad Naveed also took two wickets each and Rohan Mustafa took one wicket without given any fours and sixes.

The UAE captain Amjad Javed keeps higher faith with hope about their team players. We want to wait to watch their faithful coordinations.

You can also get score updates in the right side of this blog. Just refresh every time to get updated score.