The biggest cryptocurrency, Bitcoin rose high to 16% in a few minutes on Friday after the founder of Tesla Inc Elon Musk updated his Twitter biography with the hashtag of Bitcoin.

Musk took his handle and simply wrote “#bitcoin” on the microblogging social media site. The digital coin touching its highest now for 10 days. In the cryptocurrency world, bitcoin is the very largest one which rallied to above $36,000 as of 10:05 GMT from around $30,000.

Musk has 43.7 million followers on his Twitter, who frequently made his own comments about the market on his handle. Also, he sparked a massive impact in Dogecoin after he tweeting a “Dogue” magazine cover image. 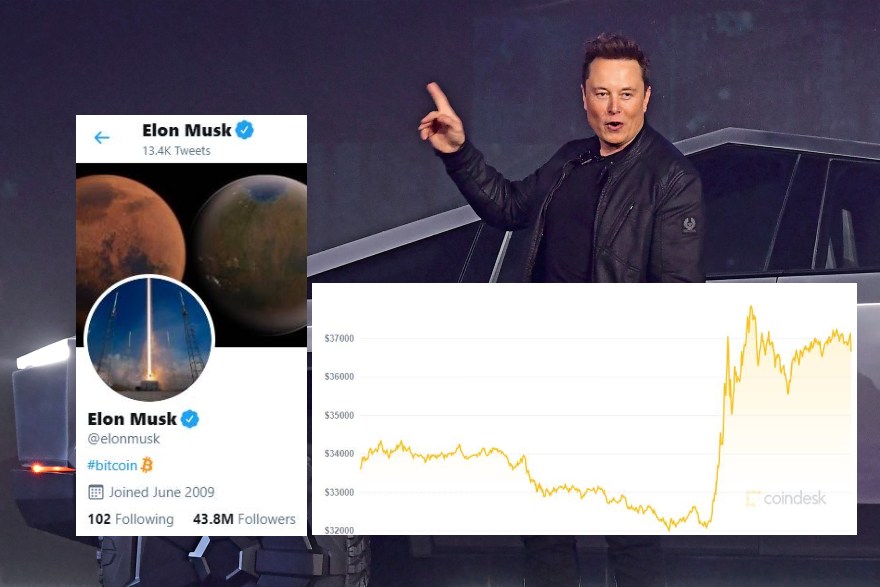 Musk asked about the possibility of converting large transactions of Tesla’s balance sheet into bitcoin with a well-known advocate on Twitter.

At the same time, the smaller cryptocurrencies such as Ethereum (ETH) and XRP (Ripple) that tend to move in tandem with bitcoin also jumped, as much as 5% and 8% respectively.

Dogecoin has become the most tweeted cryptocurrency of all time, surpassing previous records for Bitcoin, according to The TIEIO.

Sirsh @GhoshSirsh: One word from the greatest innovator of our time! #Bitcoin #cryptocurrencies

Dennis Parker @Xentagz: Elon Musk, Can we get the Bitcoin logo on the next flight, please. Just a small sticker.

Musk’s latest tweet “In retrospect, it was inevitable.’Documenting Bitcoin’ page wrote as “This message of Musk was just embedded into the Bitcoin blockchain for all of eternity.”