CAT 2016 Admit Card: The Official website has announced the date and time to download the admit card of CAT 2016. The Indian Institutes of Management Bangalore has taken this year in-charge and they will conduct the Common Admission Test 2016 on December 4, 2016. This notification is for those who all applied for the CAT 2016. The IIMs will be conducted this CAT exam to select the students for business administration programs. The Admit card will be available from October 24 at 1 PM. Get the guidelines to download the CAT 2016 Admit card here. 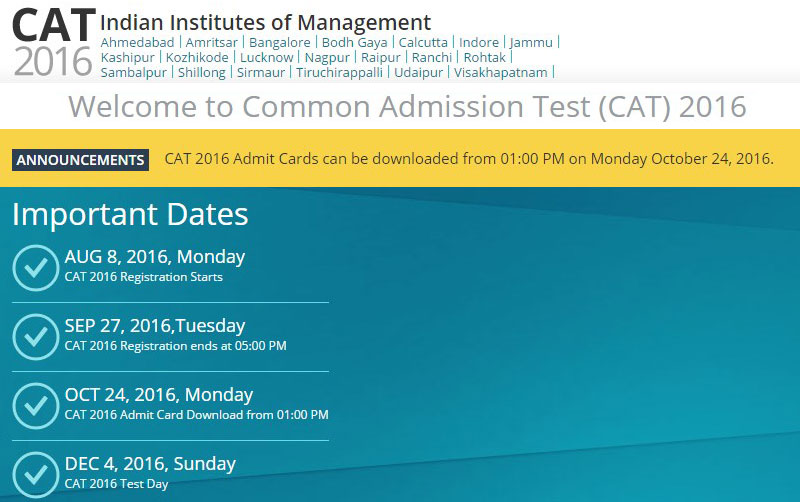 It is a compulsory exam to enter into the 20 IIMs and other top-rated schools such as FMS, MDI, IMI, NITIE, SPJIMR, IMT, BIMTECH, TAPMI, and XIMB for the course of PGP and other courses.

CAT 2016 Admit Cards can be downloaded on October 24

One of the important entrance exams in India is the Common Admission Test (CAT). It is conducting based on the various question segments as Quantitative Ability (QA), Verbal Ability (VA) and Reading Comprehension (RC), Data Interpretation (DI) and Logical Reasoning (LR). This test has conducted every year here before. So, the concerned department will be conducted this exam for this year to select the students for business administration programs. This CAT score is also used for the Indian Institutes of Technology (IITs) and Indian Institute of Science (IISc) from the year 2011.

According to the official notifications, the CAT 2016 will be conducted across 135 centers in the country. The name of the center will be indicated in the Admit card. It is expected that more than 2 lakhs candidates would register and apply for Common Admission Test (CAT) 2016. The result of this CAT 2016 will be available in the second week of January 2017. So, this CAT 2016 score will be applicable till 31st December 2017. The same website will be declared the results of CAT 2016.