Bengaluru: The Pro-Kannada activists spreads the violence over the Bengaluru and Mysore, Karnataka. The Tamil Nadu Registration vehicles have torched. Some news Channels is telecasting the Live incidents from Karnataka. The Chief Minister of Karnataka, Siddaramaiah writes a letter to the Tamil Nadu Chief Minister Jayalalithaa over violent protests. The Word and India Talking widely about this on Social Media along with the Hashtag of Cauvery Issue. 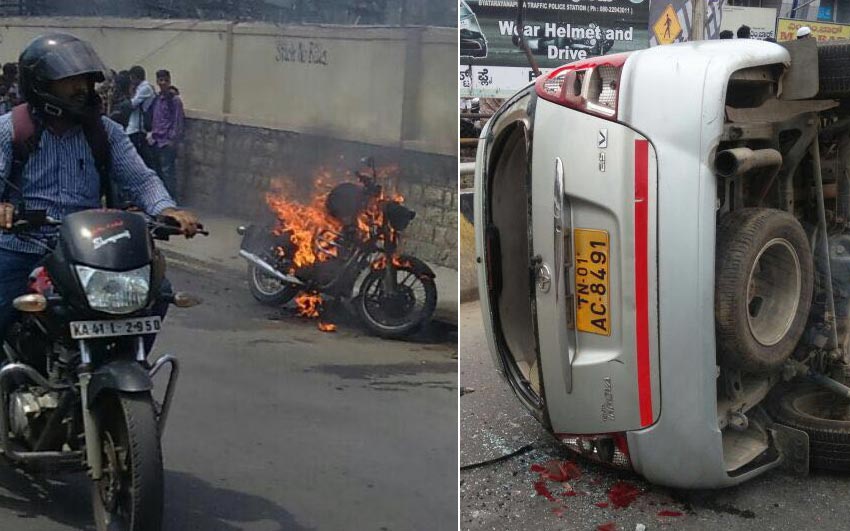 As per the reports, the Tamil Nadu Registered vehicles burnt by the Pro-Kannada Activists in some area. The Karnataka Police Officially said as “Quick Reactions teams, Rapid Action Force teams, City Armed Reserve police, Karnataka State Reserve Police deployed all over the city.” and added that “Around 270 Police Patrol Vehicles deployed over the city.”

Also, the Karnataka Police said that the “144 Section Not Imposed In Bengaluru City ! Please Do Not Pay Heed To Rumours !!”

Some of the Schools in Bengaluru has closed early Today on Monday. Some Muslim people can’t able to celebrate their Today’s Festival Eid al-Adha.

The Metro service has also Stoped after the fresh protests. The Bus Services from Bengaluru to Tamil Nadu has also suspended temporarily.

The Bengaluru Police Officially said that “The 15,000 policemen and officers have been deployed all over the city of Bengaluru. Especially for the Tamil People areas such as Indira Nagar, KR Nagar, Prakash Nagar, Frazer Town, RT Nagar, Tanary Road, Hegde Nagar, Sri Rampura and Kalasi Palyam.

#CauveryIssue: Security deployed near the statue of Tamil poet Thiruvalluvar in Bengaluru. pic.twitter.com/qqpjYQQYm1

WATCH: Pro-Kannada activists set a vehicle on fire in #Bengaluru during protests over #CauveryIssue. pic.twitter.com/hDTuNZULd1

Areas to Avoid during Cauvery Issue:

The Bengaluru City Police said “As A Preventive Measures “NOW” Section 144 Prohibitory Order Has Been Clamped In Bengaluru City !” on 05:18 PM Today due to the Cauvery Issue.

The Union Minister Sadananda Gowda has a Conversation regarding the Cauvery Issue Now. He said “People of Karnataka never expected such a verdict from Supreme Court.” and he added that, “We thought SC will send a team to see situations of reservoirs,collect data &then come to a conclusion, bt nothing as such happened.” 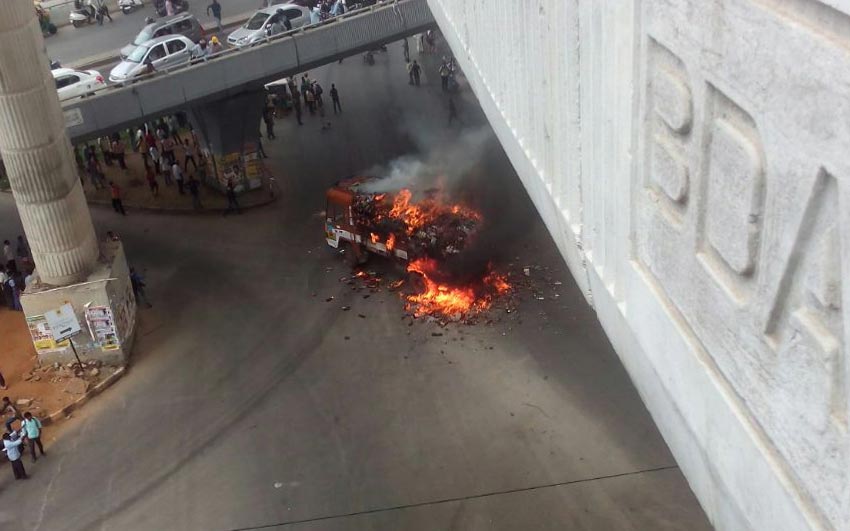 There's over-extraction of water from both sides but no efforts to conserve it: Leo Saldanha #CauveryViolence pic.twitter.com/U2dytYJ1gs

Gowda said, “It’s normal for ppl in this situation to get excited, but I request ppl of K’taka that they should maintain peace, law, and order.”

As a preventive measure, Section 144CrPC is imposed in Bengaluru City from 1700 hours today.

The Bengaluru Police imposed the Section 144 in Bengaluru City after 5 PM today.