Coinbase announced the most awaited update that it will add Segit support to bitcoin wallets. It helps to reduce the transaction fees of Coinbase users and GDAX. Becuase of the Segit activation, it will help to reach the requirements of their users.

Recently on Monday, 5th February, the Coinbase announced the news to their customer via Twitter as “Our engineering team has begun the final testing phase of SegWit for Bitcoin on Coinbase. SegWit compatible Bitcoin sends/receives will be available for customers in the next few weeks.”

As mentioned above, the size of each bitcoin transaction will be reduced and also it allows more data to be squeezed into each block. On the upcoming week, it is expected that the Coinbase will get more importance after adding Segwit.

It creates an interest to all the existed investors and traders to figure out all the good movements. Because of this update, the overall Bitcoin network transaction capacity will be improved. 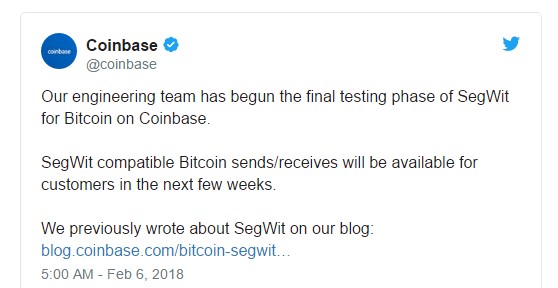 Share your thoughts about the actions of Coinbase adoption of Segwit to push other exchanges into the same basket.