Now, today on 26th July 2016, the Match 54 will be for Dabang Delhi K.C. vs Puneri Paltan at Thyagaraj Sports Complex, Delhi. Patna Pirates beats Dabang Delhi on Yesterday Match by the final score of 32 points. Scroll down and get the Match Updates and Pro Kabaddi Live Streaming Info. 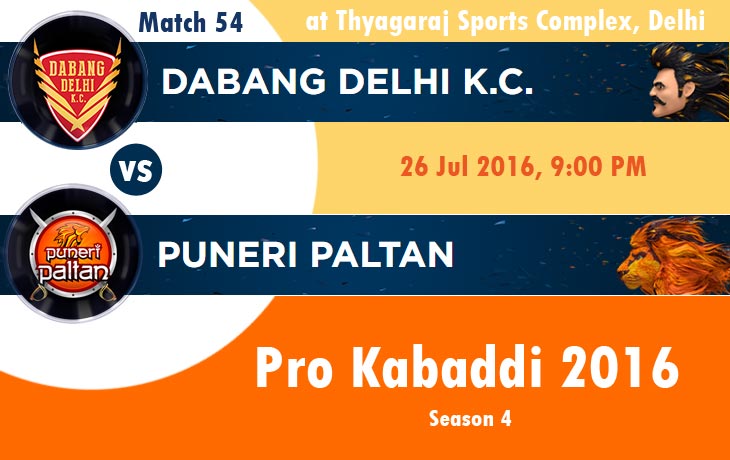 Dabang Delhi K.C played twelve games with four wins, seven losses and one tie with the points of Twenty Seven. So, the team standing in the Seventh position of PKL 2016 Points table at present (July 26, 2016). And today's match will be the Thirteenth game against with Puneri Paltan.

At present, this 54th match will be held at the venue of Thyagaraj Sports Complex, Delhi on July 26th, 2016. The Opponent team, Puneri Paltan is standing on the Fifth position with the points of 32 by Four wins, Six losses and Two ties off its Twelve played. So, it is a Thirteenth match for the Puneri Paltan in this Pro Kabaddi Season 4.

Pro Kabaddi Season 4 Points table & Standings last update is July 26, 2016 (09:00 IST). This Points Table and Standings will not be updated after this Match. Please Visit the Pro Kabaddi 2016 Schedules and More Update Page to know the current points table.