Dangal Review: Bollywood’s most awaited movie released today. Read Dangla movie review and rating here. Aamir Khan starrer Dangal movie screened yesterday for media persons. The film is also dubbed into two other prominent languages like Tamil and Telugu for India release. The Amir Khan’s Dangal screen count is also massive in Tamil Nadu as like the own regional film release. The film is releasing in nearly 5000 screens worldwide. Mr. Perfectionlist is ready to introduce his next new mark in Bollywood at the end of the year 2016. It is a real-life-based story of Mahavir Singh Phoghat, national level wrestling champion.

The Dangal Review is provided here based on Premier Show in the USA and the press show in India. Let’s read the Dangal Review, Rating, Story, Audience Response and First Day Collection here.

Mahavir Singh Phoghat played by Aamir Khan a national level wrestling champion. He gave up Wrestling to earn his livelihood. His only dream was to see his son winning a medal for India. Aamir’s idea goes into vain, as his wife gives birth to four girl child.

One day, his daughters Geeta and Babita fights with the local boys. After getting complaints about this, he feels his daughter are no less than sons. He starts training them for Wrestling. Both sisters were not happy with the new life they were going through. They get trained and beats the local wrestling male champions and her journey towards Commonwealth games starts.

The movie inspires everyone mainly women to see Khusti/Wrestling as sports and adapt it as a career as well. Dialogues like ‘Kal Subah 5 baje taiyaar rehna’ or ‘Mhaari Chlorian chhoron se kam hai ke’ will make you feel more energetic.

Aamir Khan is the heart the movie, and he again delivers his career best performance in Dangal Movie. Aamir perfectly fits into the character of Mahavir and also does justice to his role as a father too. Sakshi Tanwar as Mahavir’s wife is a perfect choice, where she emotes well. Some of her scenes in the film are loveable too. Suhani Bhatnagar and Fatima Sana Sheikh have also given good performance in the movie. Fatima as Geetha took a lot of training and pull out her best in dangal. Other supporting actress have also performed well.

The music of Dangal has already topped the list. Haanikarak Bapu has already touched everyone’s heart with its innocence. The lyrics of the song make your laugh and will make you love the song. Raftaar’s rap song “Dhaakad” is one of the most popular songs, and makes you understand the strength of Phoghat girls. Other songs like Idiot Banna, Naina, and Gilehriyaan are also good and suits the soul of the movie.

The Slap: Some portions of the movie are slow, dramatic climax.

Some of the leading media personalities have watched the Dangal film and reviewed on their Twitter blogs Yesterday. Here, it is for WORLDHAB viewers. 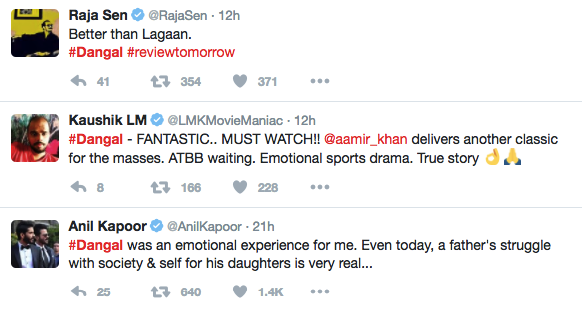 My Rating for this inspiring sports drama movie is four stars. With exciting plot, incredible performance, the movie is a must watch like other Aamir Khan movies.

Our Rating for Aamir Khan's Dangal movie is 4.5 Stars. The movie is complete entertainer with inspiring plot.