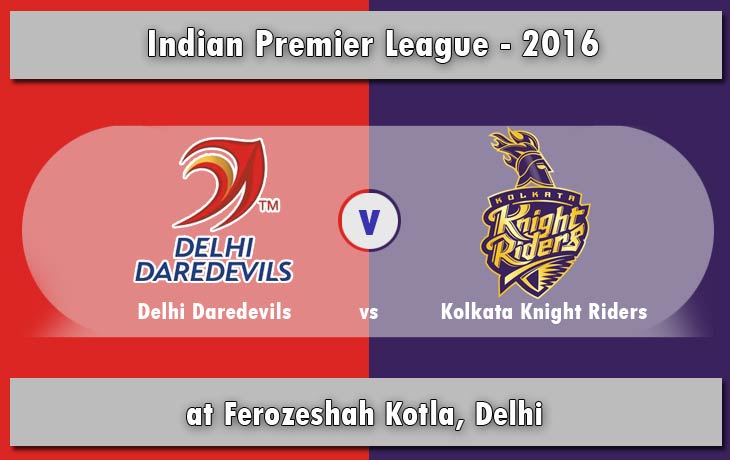 The Lowest Run chasing Match on this IPL 2016 was the Second match of this tournament against with these teams at Eden Garden, Kolkata on the First Week of this IPL 2016. Now, it is good time for well balanced team, Delhi Daredevils will treat their opponent with their stronger batting and bowling status.

Delhi Daredevils played their Five IPL 2016 as per the date April 30, before today’s Match against with KKR. On that, the Zaheer’s DD has wins their three matches with the two lose and stands on the Fourth position in the IPL 2016 Points Table.

On the Last Kotla Match, the team fails to win the Match against with Gujarat Lions by One run. Even though at the end of the Over, Chris Morris tried to hit the winning ball as a ground shot but he can’t able to win the match. The Man of the Match has been handed to the Chris Morris for his quickest run score 82 in 32 balls with the Eight Sixes and Four Fours. His effort ends with the failure on that 23rd match of this IPL.

Imran Tahir played well and picked his three wickets for the team Delhi Daredevils and also Chris Morris added his additional bowling talent on this match by taking two wickets.

It is well healthy Matches Today for Delhi Daredevils vs Kolkata Knight Riders (DD vs KKR).

Kolkata Knight Riders played their Six IPL 2016 matches as per today’s date, before this 26th match. From that played games, the team wins the Four Matches with the Two lose. So that, the team stands on the Second position in the IPL 2016 Points Table.

On that Two losses, the last Played match against with Mumbai Indians is One. In that 24th Match of this IPL 2016, the skipper Gautam Gambhir scored 59 runs with a Six is the highest individual run score on the KKR’s first innings. The Chaser of that Wankhede Stadium Match chased the 174 runs in 18 overs by hitting the Last ball Six.

The Key bowling player of KKR, Sunil Narine bowled 11 dots ball against with MI and maintained his economy rate as 5.50. Shakib Al Hasan and Andre Russell also helped lot to stop the opponents run score, but they can’t able to do that. Maximum of this IPL 2016, all the toss winning teams are choosing to Field on their first innings and they chased the score as well and wins the matches.