Mumbai Indians Won the Toss And Chose to Bowl First

Score Card of this 17th Match DD vs MI here. 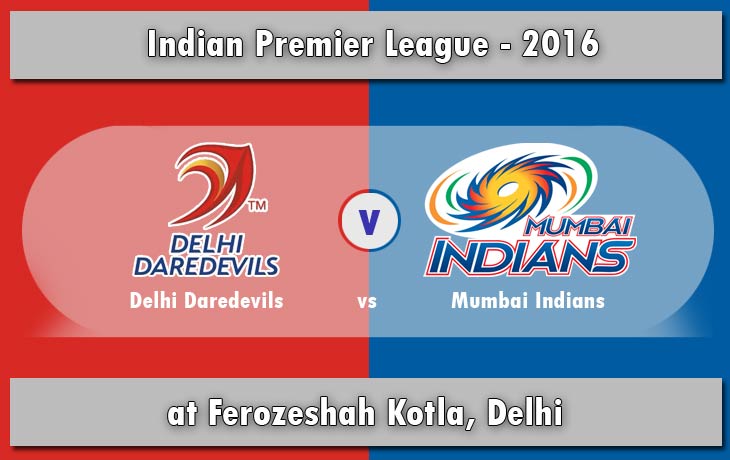 Delhi Daredevils fails to win their First match with KKR. But the team wins their next two matches. As well as Mumbai Indians played four of their matches out of two fails against with the two new franchise RPS and GL.

Zaher Khan’s Delhi Daredevils lost their Match against with KKR with the score of 99 but the team wins their next match as inversely proportional against with Kings XI Punjab.

The team bounced back to their form with the key players on Batting Quinton de Kock and on Bowling Amit Mishra. We can’t be able to forget about the first century on this Indian Premier League (IPL) 2016 by the opener De Kock. Also, this match was held at the Royal Challengers Bangalore’s own ground is a notable.

Even though, the other middle order batsman such as Karun Nair, and Sanju Samson Delhi batters have not performed well. Also, the star players (concern about their cost), Carlos Brathwaite and Pawan Negi need to made their contribution to justify their price.

The Rohit Sharma’s Mumbai Indians stands on the position of Five on the IPL 2016 Points table as of the date 23rd April 2016. The openers of this team, the skipper Rohit Sharma, and Ambati Rayudu are made their consecutive run scores as good while compares to the middle batting line-up.

As overall IPL matches from the First serious to today, those teams are played as Face-to-Face in 16 matches. Whereas, both of the team wins Eight each. Need to wait for this Interesting Match.

Rohit Sharma Played against with Delhi Daredevils on all face-to-face matches and he has scored 559 runs in IPL T20s.