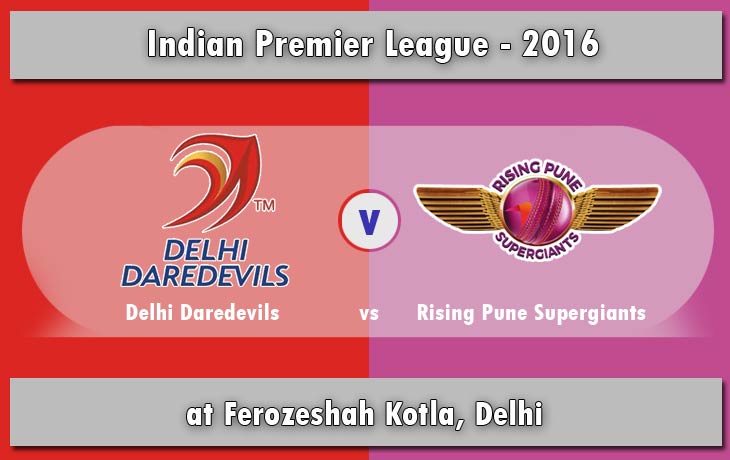 It is Eighth Match for Delhi Daredevils and Ninth Match for Rising Pune Supergiants. As IPL 2016, it is the Match 33. DD stands on the Top of the Points table whether RPS stands on the bellow of the IPL 2016 as per the date.

Zaheer’s Delhi Daredevils (DD), their last match against with the Gujarat Lions ends with the favor of Delhi. The opening batsman, Quinton de Kock and Rishabh Pant were fired and scored 61 runs in the first six overs as approximate run rate of 10 on that Tuesday Night against with Raina’s Lions.

The First innings of that Match has been done by the fielding of Delhi Daredevils, the young bowlers were took three wickets on the Powerplay.

The team, RPS lost their Four Foreign players such as Faf du Plessis, Kevin Pietersen, Mitchell Marsha and Steve Smith. This is another burden for the cool captain MS Dhoni. Unfortunately or fortunately, the team lost Five of their first batting Matches as of now. RPS stands on the sixth place on this IPL 2016 Points table as per today’s date with the winning of two games.

MS Dhoni found two of the players for replacing the space on his RPS Playing 11. Usman Khawaja and George Bailey were preferred on those gaps. The biggest problem for RPS is a bowling, as per the record of played eight matches; Murugan Ashwin took only seven wickets and the R Ashwin were taken only three wickets in the Eight Matches.