Dhruva box office collection: The Tollywood latest film marked the biggest number in the United State. The film beats the record of Bollywood love film, Befikre. Ram Charan Teja’s Dhruva is the number one at the latest release from India in the US. The film earned twice the collection of Befikre that earned $ 500,000 according to the report of Ramesh Bala. The Telugu language film Dhruva was released in 202 screens in the US. 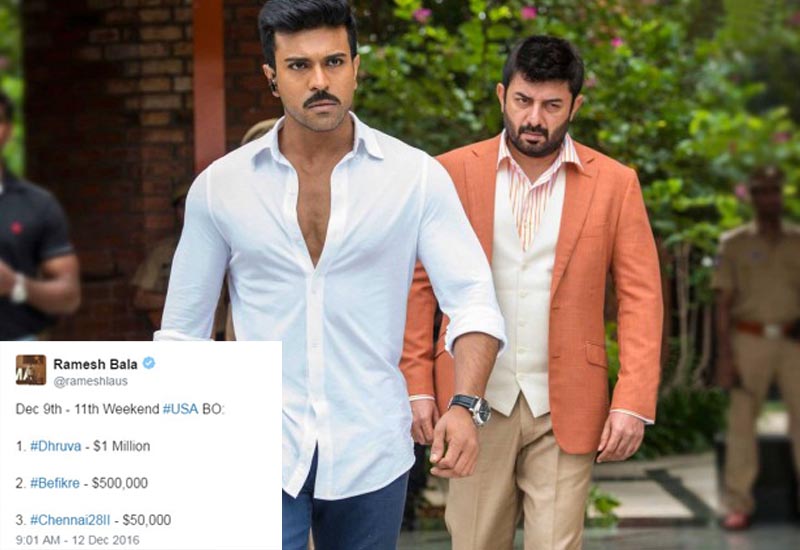 The lead actor of the film has thanked the audience for making his film a big commercial success. He said that “Having a great time touring in USA with my Dhruva team. Meeting the audience here was a long over due and I am happy to be able to finally do it.” Also, he added that, Will be back home to celebrate the success with the rest of you. Thank you for the great things being said about Dhruva.”

Looking at its budget of Rs. 45 crores, approximately, Ram Charan’s latest stint Dhruva has marked 1 million USD in the US market. It is a positive sign for a Telugu language films.

Aravind Swamy tweeted that “A big Ty to the Telugu audience for welcoming me, appreciating my work and making #Dhruva a blockbuster. Ty for the love?? (sic).”

Dhruva is the Official remake of Tamil film, Thani Oruvan. Ram Charan and Aravind Swamy are the key roles of the film. Rakul Preet Singh has acted as the female lead role in the Surender Reddy directorial.