Tamilnadu’s DMK acting secretary M.K Stalin is today’s hero after TN Assembly Floor test. Earlier today, Floor test was conducted at the assembly in which DMK MLA’s are taken out by the assembly bodyguards. After this issue, Stalin with Teared shirt came to the assembly and visited TN Governor at Raj Bhavan. Now, Stalin and Co is protesting before the Gandhi statue at Marina beach to show their oppose on the Speaker Dhanapal and AIADMK government’s one side moves in the assembly.

DMK members from many parts of Tamilnadu are coming to the Marina beach to join this protest and fasting. In many areas, there are so many clashes between many gangs and attack on shop owners after the TN assembly floor test result. Tamilnadu Youngsters are also joining the protest soon to show their oppose on E K Palanisamy’s AIADMK rule which is under DA case convict V.K Sasikala. 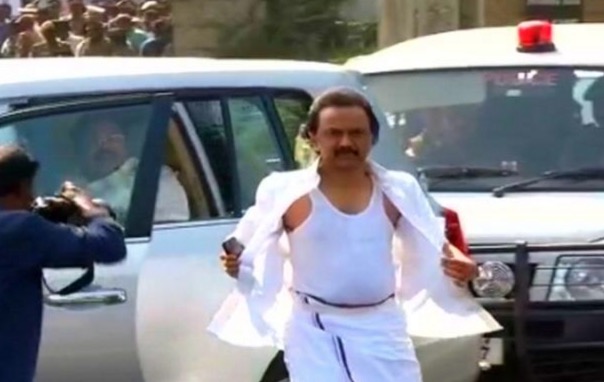 After few minutes of their fasting against the government, M.K Stalin and other MLA’s have been arrested by the Police. All issues arise as the Speaker didn’t agree with a secret ballot and the later date for a floor test. Stay tuned for more updates from Marina regarding DMK’s protest.