Are you a Shah Rukh Khan Fan and waiting for SRK upcoming movies? If your answer is yes, then be happy as Shah Rukh Khan is coming with his upcoming movie “FAN“. FAN Movie is already creating the records with its millions of YouTube views. King Khan’s next movie FAN is a psychological thriller starring Shah Rukh Khan. FAN movie release date has been announced and stated to be released worldwide on 15th April 2016. Read below about Shah Rukh Khan’s Fan Movie Wiki, Cast, Story, Teaser, Trailer, Audio release date and Download Songs.

All About FAN Movie

Fan movie release date is already confirmed and the movie is going to be released on in India as well as worldwide on 15th April 2016.

The Movie is directed by Maneesh Sharma of Band Baja Baarat Fame, produced by Aditya Chopra under Yash Raj Banner and music by Vishal-Shekhar. Italian composer Andrea Guerra who debuted with Dum Laga Ke Haisha will also contribute to the music for this movie.

On December 2015, Yash Raj Team announced their movie with Shah Rukh Khan as Lead and Maneesh Sharma as Director. The principal photography began in July 2014. Greg Cannom was robbed for Young Shah Rukh looks for the movie. SRK went 3D scanning for complete facial change for FAN movie. The movie is first ever movie to be shot in Madame Tussauds museum. The movie was delayed due to injuries caused during the shoot of SRK’s previous movie Happy New Year with Farah Khan. After long delays, Yash Raj films have officially announced to release the movie on 15th April.

FAN’s trailer has already created a lot of chaos on the story line. FAN’s story revolves around a Superstar Aryan Khanna portrayed by Shah Rukh Khan and his biggest Fan Gaurav which is also portrayed by SRK. Gaurav’s desire is to meet the superstar. The story revolves around the journey of a Fan meeting his favorite star and the post meet incidents.

FAN’s Music is composed by musical duo Vishal-Shekhar and the songs are written by Varun Grover whose previous work in Dum Laga Ke Haisha was well appreciated. The FAN anthem and the only song “Jabra Fan” was released on Feb 16, 2016. The complete audio Track was released on 22 Feb 2016 consisting 7 songs, all of which were different versions of “Jabra Fan“ in multiple languages. The song was in 7 different Indian languages sung by regional singers. Find the complete list of FAN song: 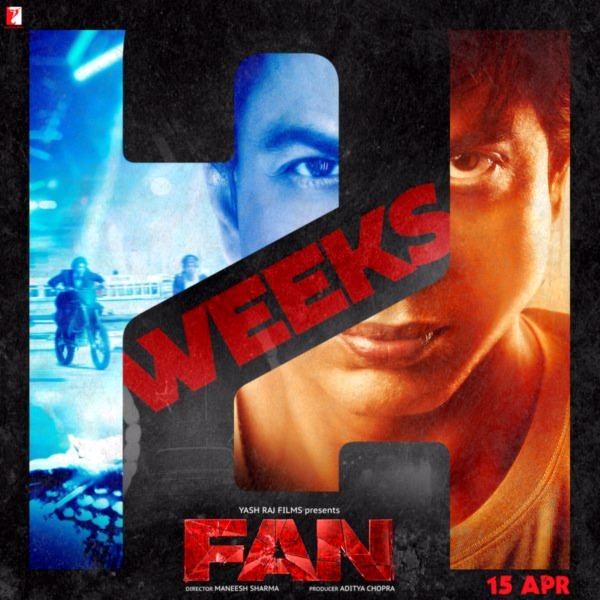