Gujarat Lions vs Kings XI Punjab, GL vs KXIP Live Score Updates: Suresh Riana’s Gujarat Lion’s will going to clash with Murali Vijay’s Kings XI Punjab on this Sunday (01st May, 2016) at Saurashtra Cricket Association Stadium, Rajkot. Scroll down to get Full ScoreCard and Highlights of the GL vs KXIP match.

Gujarat Lions Won the Toss and Chose to Bowl First 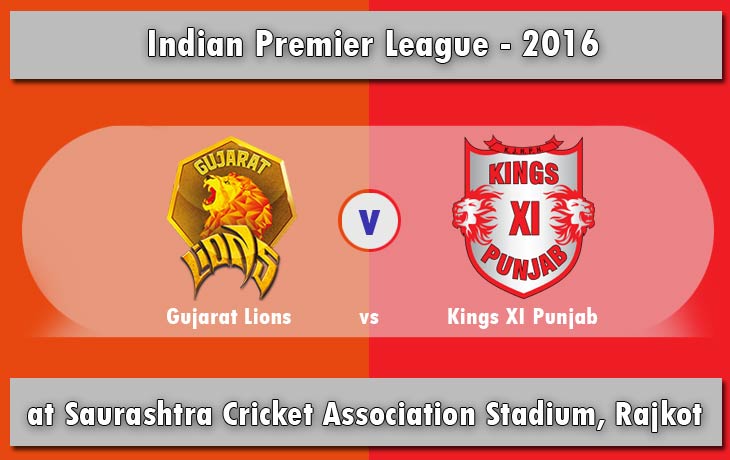 Gujarat Lions were played Seven matches on this IPL 2016 as per today’s date. Their Opponent were also played Six Matches. So, it is Eight Match for GL and Seventh match for KXIP.

The team, GL wins their Six Matches out of Seven on this IPL 2016. So, the team stands on the First position in the Points Table of this tournament. Dwayne Smith and Brendon McCullum are made the huge opening on the Last Match against with Rising Pune Supergiants. The Raina’s team need Nine runs on their last over. They made it with the birthday boy’s two of the fifth ball and wins the Match.

The Captain-ship has been hand over to Murali Vijay from David Miller. So, here after, Murali Vijay is the Captain of KXIP for remaining Matches of this IPL 2016 Tournament.

The Statement said about the change of Captain-ship as “Kings XI Punjab announces M Vijay as the Captain for Kings XI Punjab for the remaining part of the IPL 2016 tournament. David Miller continues to be an integral part of the team and is a very strong player of the squad.”

AS of Now, the team has win only one out off Six Matches in this IPL 2016. That winning match was done against with the Dhoni’s Rising Pune Supergiants. We all know about that, the team was weekend on both of Bowling and Batting.