RPS won the TOSS and Chose to BAT First

Get Full Score Card and GL vs RPS Highlights here 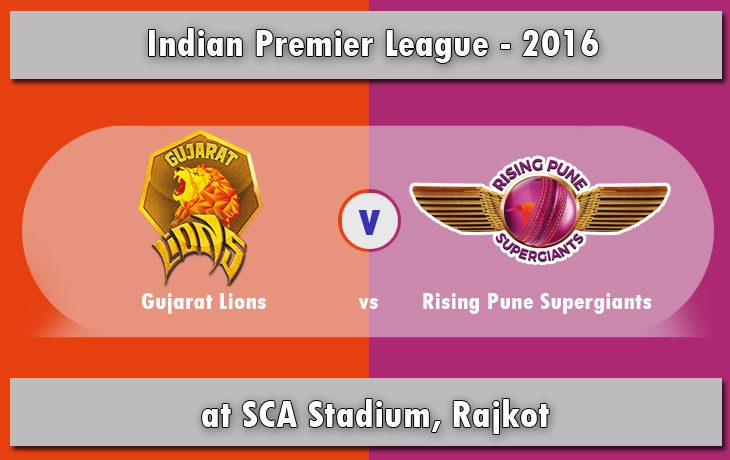 Both of the team Captains are from a Chennai Super Kings. Those skippers have started their matches in this IPL 2016 with winning status against with Kings XI Punjab on Match 3 and Mumbai Indians on Match 1. Here today on April 14th, 2016 both of the team face each other at Rajkot stadium.

Aaron Finch started his good run against with Kings XI in the last match. Even though the team needs to improve their batting, as we saw that match as replay, Punjab bowlers only made the way for Lions wins. One another important key player for GL, who is the captain for Under-19, Ishan Kishan. Also, the team was packed with T20 run gutter; Bravo is the only one player in IPL series who scored 1000 runs and with 100 wickets.

Read about Lions winning game against with Punjab

The team skipper, MS Dhoni lead his team as well against with the winning game with defending champions Mumbai Indians in nine wickets. However, the team didn’t need their middle order batsman. Last time, Ravichandran Ashwin were bowled only one over. Dhoni’s timely mind made the team’s win on the maximum of the matches. Ajinkya Rahane and Francois du Plessis itself managed their first match with the partnership score of 78 runs in 9.4 overs. And the second highest partnership of the match was made by Rahane with Pietersen as 48 runs in 5 overs. According to the report of Match 1, RPS looks more powerful on their batting and also on bowling.

On today’s match, the two good friends MS Dhoni and Suresh Raina will face each other for the first time in IPL. Moreover, most of the key players are splits into two from CSK. Somehow, the fans are looking this match as usually without any winning mindsets.

We know @msdhoni has fans everywhere! From the world of cricket and beyond 😉 #DumKaNayaRang pic.twitter.com/Hq1LBFOTOw