Get the Scorecard of this Match GL vs SRH here. 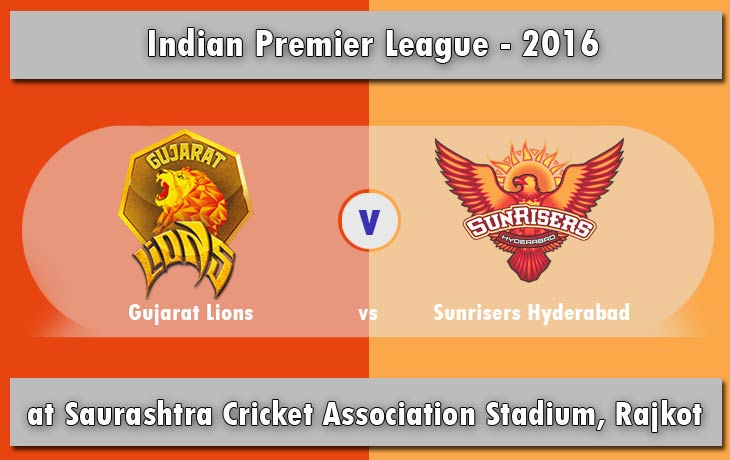 Both of the team will be going to Play their Fourth IPL 2016 Match at Saurashtra Cricket Association Stadium, Rajkot Today on April 21, 2016. Raina’s Gujarat Lions Consecutively wins the first Three Matches in this Tournament. David Warner’s Sunrisers Hyderabad wins their last match alone from the first three matches of this IPL 9. Let take a look the Gujarat Lions vs Sunrisers Hyderabad Preview here bellow.

All the Indian Fans are impressed by the Hat Trick winner of this IPL 2016. Here, on this Thursday, the team Suresh Raina‘s Gujarat Lions will be going to face the David Warners’ Sunrisers Hyderabad.

Ravindra Jadeja is back to the play, who didn’t play the game against with the defending champions Mumbai Indians on last Saturday (April 16, 2016), because of his wedding.

As we all known about the winning of this team against with MS Dhoni’s RSP, Davis Miller’s KXIP and Rohit Sharma’s MI. All of this three matches consists with the half-century of Australian Opener Aaron Finch as 74, 50, and 67*. It is the Second time in the IPL history about a Player won the three Consecutive Man of the Match Award.

Also, there was a Batsman named as Bredon McCullum; he scored 49 runs in 39 balls against with the IPL 2016 debutant Rising Pune Supergiants. It is one of the big points for Raina’s team today at Rajkot.

Because of Jadeja‘s return, the team will be sharpened more on their bowling department with the partners of Dwayne Bravo, James Faulkner, Pravin Tambe and Praveen Kumar.

The team wins their Last match against with the Sharma’s Mumbai Indians with the help of massive individual score from the skipper David Warner‘s 90 off 59 balls.

The team has a three major absence because of the injuries, Yuvraj Singh and Kane Williamson. Both suffered from the injuries on T20 World Cup 2016. So the team facing lots of difficulties about their winnings on upcoming matches also.

The Department of David Warner’s Bowling didn’t perform well in their last three matches.  Bhuvneswar Kumar, Bangladesh seamer Mustafizur Rahman, Moises Henriques and spinner Bipul Sharma are there to support the bowling attack. Ashish Nehra’s absence is one of the drawbacks for Sunrisers Hyderabad.