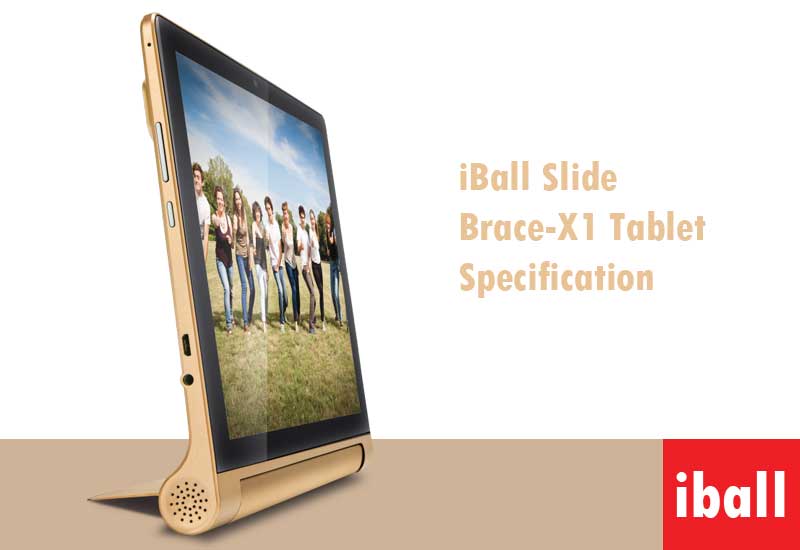 The latest Brace-X1 Tablet stands on its own design, and this tablet is available in Bronze Gold color alone. There are no more options on colors. People can use this tablet in three different ways of usage. The Tablet has designed with the pre-loaded useful Apps for both work and entertainment. Inbuilt games like Asphalt Nitro, Bubble Bash 3, Midnight Pool, Modern Combat 4 Zero Hour, and Spider-Ultimate Power are there under Gameloft.

The iBall Slide Brace-X1 Tablet allows the users to play the High Performing games and videos by using the 8 cores with the speed of 1.3GHz Octa Core Processor. The 25.62 cm display had the resolution of 1280 x 800 with the IPS HD multi-touch screen. This new tablet is available with the latest android version of 6.0TM, Marshmallow. Brace-X1 can allow the users to store lots of applications, photos, videos, and documents by using the 2GB RAM, 16GB built-in storage and it allows to use the external storage up to 64GB.

According to the iBall Slide Brace-X1 Tablet Camera: It has designed with the 8MP auto focus rear camera with the LED flash and it have the front-facing camera of 5MP sensor. The Slide had the default camera settings such as Panorama, Face Beauty, Continuous Shot, Voice Capture, Face detection, Self-timer, Smile Shot, HDR, V Capture, zero shutter delay. The latest iBall Slide has made with the power of the 7800mAh battery. The tablet has made with the FM recorder.

This new iBall Slide allows us to write and read up to 21 regional Indian languages by using the multi-language inbuilt keyboard. Also, we can use nine Indian regional languages as a system language.

Google Capital Rebranded, Now will be called as “CapitalG”

Google Capital Rebranded, Now will be called as "CapitalG"