Are you searching for ICC T20 World Cup 2016 Schedule? Then you are at right place. Yes, The International Cricket tournament World Twenty20 2016 is to be held in India from March 8, 2016, to April 3, 2016. ICC announced the complete ICC World Cup T20 2016 schedule for both of the Men’s and Women’s Cricket. Here, we post the ICC World Cup T20 2016 Schedule, Fixtures, Time Table and the group details of the Men’s tournament.

Whereas the First match will be played at Vidarbha Cricket Association Stadium, Nagpur, and the Final game will play at Eden Gardens, Kolkata on April 3rd. 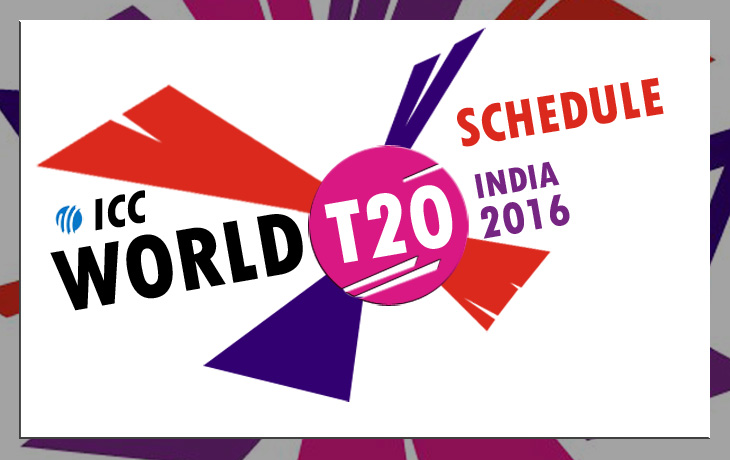 The Qualifier matches will begin from 8th March to 13th March according to the ICC T20 World Cup 2016 Schedule. From the World Cup T20 2014, the 16 team version was started. So, there are totally 16 teams, whereas the eight teams directly entered into the Super-10 stage. Other eight teams where to play the qualifying stage and two winning teams will join with Super-10.

Some of you have a doubt about the test nations, Bangladesh, and Zimbabwe‘s qualify needs?

According to the Ranking of ICC T20Is up to the date of April 30, 2014, the top eight teams get directly into the Super-10 stage. But, Bangladesh and Zimbabwe didn’t have that features to place on Super-10 stage. So, those teams need the qualifying round to enter into that phase.

There are totally 35 matches will be played based on the ICC world Cup T20 2016 Schedule. As per the Schedule, the first 12 matches for the qualifiers and remaining 23 matches for the Super-10 and this games will begin on March 15, 2016.

How the team UAE entered into the Asia Cup as same as in ICC World T20, the team Oman entered with their previous performance.

BREAKING: The official #WT20 tournament app is available to download for free on both Android and iOS platforms! pic.twitter.com/70tzz8ncKu