Vijay has sung a song for Bairavaa: The Actor Vijay’s voice will hit the mobile phones before the release of bairavaa in theaters. He has done his song with Santhosh Narayanan musical recently for his upcoming film, Bairavaa. The music composer has officially tweeted his experience with Vijay’s voice, song and about his dance for that song. 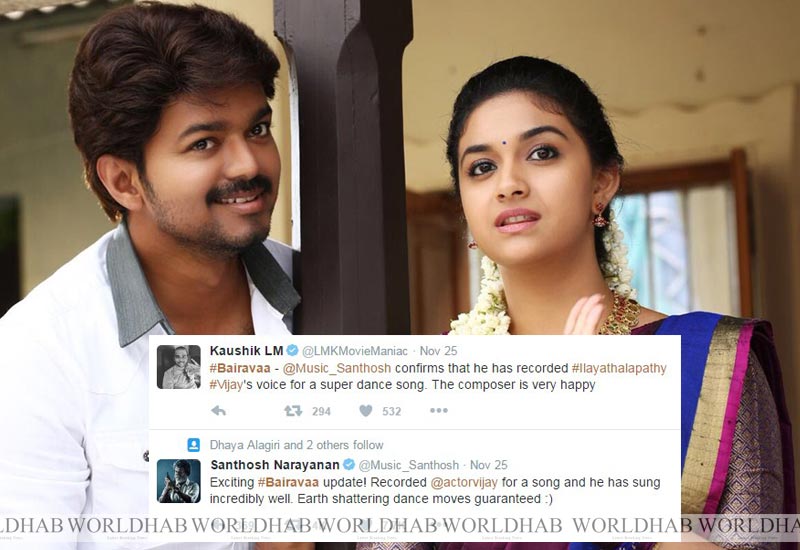 The full-fledged commercial flick with a smart screenplay had a song with the voice of Vijay. Apart from the Acting, Dancing, fighting, singing is the additional talent for the Actor Vijay, who is the son of Carnatic singer, Shobha. He dropped his own voice song after the Vaadi Vaadi song with Devi Shri Prasad for Sachin in 2005. Later, he kicked off his own voice for the song for the movie Thuppaki, which has directed by the AR Murugados. His resume works with Harris Jairaj made a massive hit before the release of the film in 2012.

All the hit films of the Vijay, which all had the song with the voice of Vijay. The upcoming song for Bairavaa is the 33rd song by Vijay in his cinema career after the hits of “Google Google” in Thuppaki and “Selfi Pulla” in Kaththi.

The Music director mentioned that it is sure for the earth shattering dance moves for this song. So, the song might be a folk (or) electronic western (or) any other Santhosh Narayanan’s style.

Santhosh Narayanan, who had the most music with the director of Pizza, Soodhu Kavvum, Jigarthanda, and Madras. Recently, he made a big product in Tamil Cinema for the superstar Rajinikanth’s Kabali. The song ‘Neruppu Da’ is still roaring all over the Tamil Nadu frequently.

Keerthy Suresh plays the female lead of Vijay’s 60th film. It is Bharathan’s directorial film, which is producing under the banner of Vijaya Productions. The movie crew releasing various snaps from the film frequently. The Bairavaa teaser is clocking 10 million views and making records before the film release. The Vijay’s 60th film is slated for the release of Pongal (Sankranti) festival in 2017.