The second day of the second test match between India and Australia is set to begin at 9.30 am IST (04:00 am GMT, 03:00 pm AEDT) on Sunday. In the first day, India has won the toss and scored 189 runs in 71.2 overs for ten wickets. The opening striker of India, Lokesh Rahul scored 90 runs as highest in this first innings for 205 balls. Karun Nair’s 26 is the second highest score of the India’s batting. Nathan Lyon is the key player of this match; he took eight wickets out off ten by giving 50 runs in 22.2 overs.

David Warner and Matt Renshaw are on strike and scored 40 runs for their team in 16 overs. However, India lost their first wickets in 2.5 over with the total score of 11. Abhinav Mukund is the first wicket who didn’t score any runs.

Highlights of Day 1 in India vs Australia Second Test match: Nathan Lyon is the best visiting bowler in India after Lance Klusener’s eight for 64 in Kolkata in 1996. He is the second best Australian spinner in Tests after Arthur Mailey’s nine wickets for 121 runs against England in 1921. After Parthiv Patel (83 matches from 2008-16), Abhinav Mukund missed 56 Tests is the second most for an Indian player b/w two appearances in Tests. 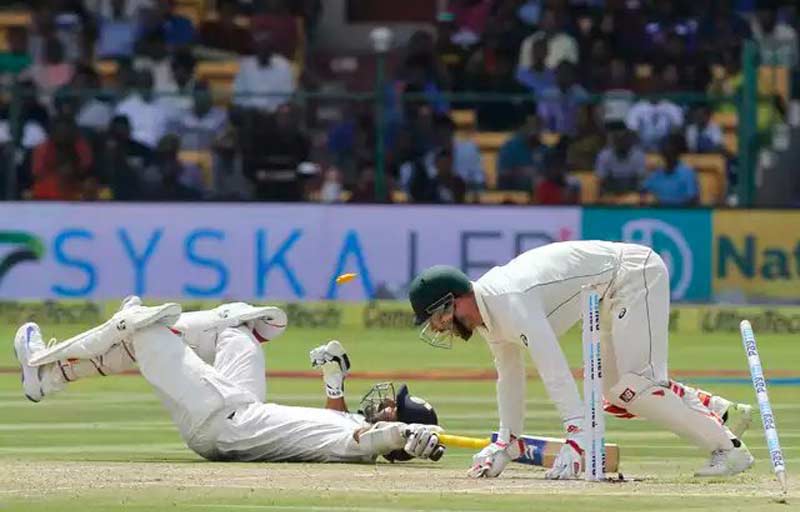 For India Cricket fans and people, there are four TV channels and an official Live Streaming website. They are., Star Sports 1, 3, HD1, and HD3. Hotstar is providing the Live Streaming Online match of India vs Australia.

The Australia had official TV and online Streaming services by using the Fox Sports 3 and its’s Foxtel. The United States and United Kingdom people can watch the match on TV with Willow TV and Sky Sports 2 respectively. Also, the official online streaming of these channels are providing the Live broadcast of this second Test match between India vs Australia. Watch Sky Sports and Willow TV Online Live Streaming of the USA, Canada and the UK.

The New Zealand had official TV of Sky Sport and Online Live Streaming of Sky Go NZ to broadcast this match. OSN Sports Cricket and it’s OSN Cricket Live is the Middle East Sports channel which providing the Test Crickets of IND vs AUS.

The South Africa living Cricket fans can watch this match on TV and online by using SuperSport Seven and SuperSport Online.