Looking for India vs Australia T20 World Cup Live Score Updates and learn how to watch Live Streaming Online? Simultaneous teams on this ICC T20 World Cup 2016, however both of the team lost their first game against New Zealand and wins with Bangladesh and Pakistan. Now it is the end for group 2 where India vs Australia going to face each other at Punjab Cricket Association IS Bindra Stadium, Mohali, Chandigarh, India in 19:30 IST.

Update: Australia won the toss and chose to BAT first 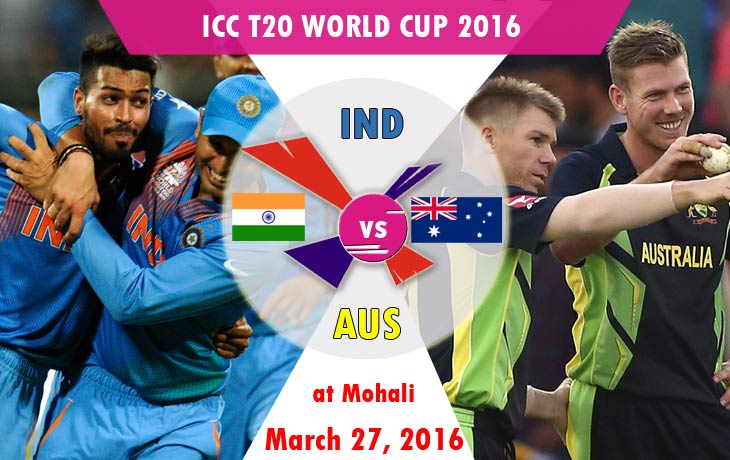 The Australian team spontaneously changing their playing 11 for every match they played last three. But India keep their same eleven Blues on all the last matches. Both of the team performed equally on their last five matches as WWLWW.

From the 25th match, India loss their toss but took a winning track against Bangladesh on last three balls of the innings. In that, all the top player went out from the ground with talkable scores. Whereas, Dhawan scored 23, Virat Kohli scored 24 and after a little gap, Suresh Raina scored 30 runs with dual six. The Player of the match Ravichandran Ashwin, Jadeja and Pandya are all took two wickets each.

Australia scored the total as 193 against with Pakistan on 26th Match of ICC T20 World Cup 2016. Smith and Watson drive the match until  the end of the innings with 61 and 44 runs. Maxwell also joined with the team and scored 30 runs in 18 balls. James Faulkner was the first Australian bowler to pick the 5 wickets in a T20I. Then, Adam Zampa took two wickets for his team.

Virat Kohli talks as “This format requires you to be at the top of your focus and concentration for 120 balls with the bat and on the field as well. That’s the only thing we can look to do.”