The 13th Asia Cup Twenty20 series will start today at Bangladesh with the clash 1st Match between India vs Bangladesh teams, and the match will be held at 7 pm at Shere Bangla National Stadium, Mirpur. It is the first time, the Asia Cup conducts the series as Twenty20, and it was concern about next month Twenty20 world cup. There were five countries in the list of this series: India, Sri Lanka, Pakistan, Bangladesh and UAE. 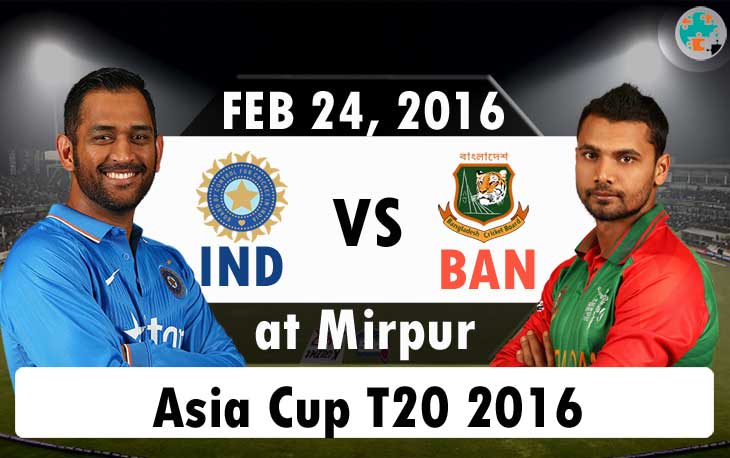 It is doubtable about the presence of MS Dhoni at the pitch because he is suffered from a muscle spasm. So, BCCI needs Parthiv Patel to makes a backup Wicket-Keeper. Recently, he was played well in the local matches and scored centuries in the local tournaments.

BCCI secretary Anurag Thakur said in a statement as, “India ODI and T20 captain MS Dhoni has suffered a muscle spasm in the back during a training session today in Dhaka.”

But Toss happened, and MS Dhoni is playing today.

And the overall point of view, the Indian team is looking as good form due to the recent continues victory against with Australia and Sri Lanka. It is the notable point, the Indian team was beaten by Bangladesh at the same pitch last year in 3 match One-Day International series. So, it is little tough to play in front of their home crowd for team India.

Also, Indian team players especially batsman will need to perform well and ready to face the left arm medium fast Mustafizur Rahaman. Because of his ball, India lost their matches last year. Taskin Ahmed and Al-Amin Hossain are also ready to give the toughest bowl against to the Indian Bats’.

Indias’ top batting order having with Shikhar Dhawan, Rohit Sharma and Virat Kohli. And in the middle, as a general, specialist in the row such as Suresh Raina, Yuvraj Singh and Dhoni.

About bowling lines ups: Ashish Nehra, Jasprit Bumrah, Ashwin and Jadeja. A new bowler, Jasprit Bumrah makes the India team as an extra safety at the last minute of the match.

As early said, Mustafizur Rahaman, Shakib Al Hasan, Mahmudullah Riyadh, Soumya Sarkar, and all are ready to play on their birth ground.

Just Toss happened, Bangladesh had won the toss and chose to Bowl first. According to the stats, India only loses four wickets in average when they play T20 in Bangladesh.

We hope this match is going to be a great start for the Asia Cup as most of the players in both the teams are in Good Form.