Time for India vs Pakistan in the ICC event again. For the first time, India is clashing with Pakistan after the ICC Cricket world cup 2015 and those teams are set to take the field in Match 4 of Asia Cup T20 2016 tournament at Mirpur, Bangladesh on February 27 (Saturday). We all known about this Asia Cup tournament, it has been contested 12 times in One-day format and now, the first time in T20 format. As of now, three matches of Asia Cup were completed with the winning of India, Sri Lanka, and Bangladesh. It is India’s 2nd Asia Cup 2016 match and Pakistan’s 1st Asia Cup 2016 match, will be held on 01.30 GMT at Dhaka (7.00 PM IST)

Man of the Match: V Kohli 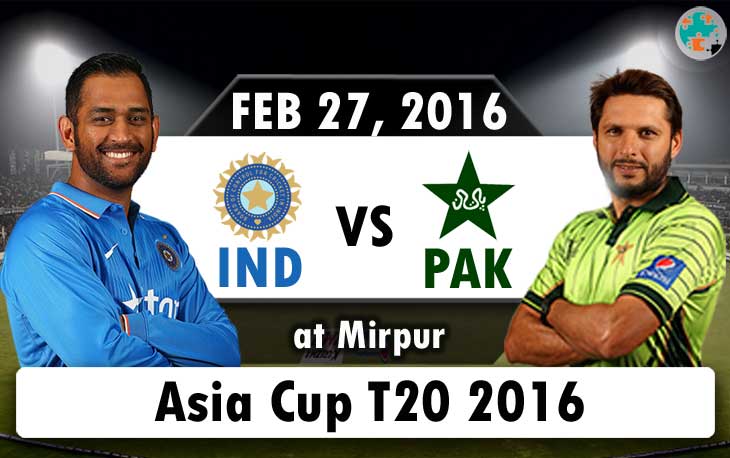 Yup..! The much awaiting match will start with the protection of well-dressed patrols. Indo-Pak Asia Cup T20 2016 match is now on air. India won by 76 runs on their last meet on World Cup 2015 is one of the notable thing here.

India won six of their last seven matches against with Sri Lanka and Australia. So, all the Indian fans are expecting this well-performance by India on upcoming matches, especially with Pakistan. Both of the team will face each other in exactly after a year and 11 days. So, this match makes higher expectations on both of the fans from India and Pakistan. Dhoni's back muscle spasm is one of the worries for Indians, even though he attempt his first winning match against Bangladesh. But, he has skipped his training in Fatullah on Friday, if suppose he decided to skip then, Parthiv Patel will be the back-up wicket-keeper who gets the chance to play this match.

Recently, Pakistan concluded their Pakistan Super League (PSL), and now, the players are well prepared for this Asia Cup 2016 T20 series. Umar Akmal, who was the most top run scorer on PSL with 335 runs on seven matches is really in good form. One of the best pacers, Mohammad Amir, will come back to the International cricket after five years of Ban because of spot-fixing. But, it was unknown aspect about Amir on the row of XI. If he was on playing 11, then he is a perfect corner for Pakistan in this match against India and it will be nice to see Rohit vs Amir were both are in good form.

The top line-up of India with Shikhar Dhawan, Rohit Sharma, and Virat Kohli are all in good form in their recent matches about their performance. Especially Rohit Sharma’s 83 out of 55 balls with seven fours and three sixes made the good opening on the first match of Asia Cup 2016, and also, his score helped to win the match. Suresh Raina and Yuvraj Singh played decent shots and scored 13, 15 respectively. The All-rounder Hardik Pandya made beautiful knocks on last few overs and scored 31 out of 18 balls with four fours and one six. And the innings was ended with predictable huge six by the team captain, MS Dhoni.

Jasprit Bumrah, Ravichandran Ashwin, and Hardik Pandya are all just gave 23 runs and took one wicket each. Ashish Nehra outperformed every other by taking three wickets, and Ravindra Jadeja gave 25 runs without any wickets in the first Asia Cup match against Bangladesh.

Shahid Afridi, Shoaib Malik, Mohammad Hafeez and Umar Akmal are only the four players, who have all faced the last India T20 International match on this same ground on March 21, 2014. And India won this match by seven wickets.

India vs Pakistan Asia Cup Match 4 will be telecasted on