Searching for India vs Srilanka match 7 of Asia Cup 2016 Live Streaming Online? After a recent T20Is series, India and Sri Lanka will clash with each other on March First (Tuesday) in Mirpur Cricket Stadium, Sher-e-Bangla National Stadium.  India win's Seven games out of their Eight but Sri Lankan's lost Six out of their last Eight T20 Internationals. This Asia Cup 2016 Match- 7 is the Third game for both of them. India celebrates their victory on last two matches against with Bangladesh and Pakistan. Sri Lanka also played their Two games in this tournament lastly whereas they lost the previous match against with Bangladesh. You can be watched the Live Streaming of this match here.

Updates: India Won the Toss and Chose to Field

Man of the Match: Virat Kohli (56 runs from 47 balls with Seven Fours) 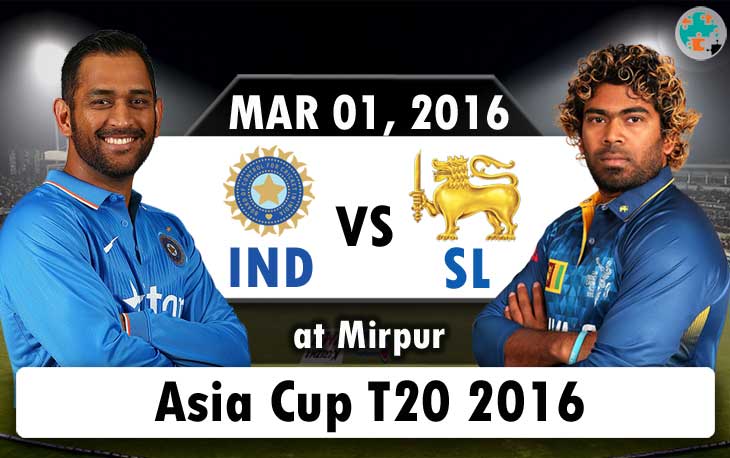 The Island country lost their T20Is serious on the recent tournament with India by 2-1. But the games played without primary keys such as Lasith Malinga and Angelo Mathews. The team win's their Final on T20 World Cup 2014 against with India by Kumar Sangakkara's 52 but, now he is not there in Lankan's team. This game is doubt-able about the presence of Lankan Captain and primary key bowler, Malinga because, his knee problem arise-up again. In Indian team,  Shikhar Dhawan has recovered from his discomfort situation. So, he will play again with his companion and opener, Rohit Sharma in this game.

The team India, who stands on top of the points table. It is known fact about current Indian Cricket team's batting line-ups with Rohit Sharma, Shikhar Dhawan, Virat Kohli and Suresh Raina. The last two matches recorded with Rohit's 83 and Kohli's 49. In Bowling, Ashish Nehra, and Hardik Pandya marked their best in this Asia Cup. Especially, the Hardik did with his best against Pakistan on the last match and get 2.28 Economy rates. On both of batting and bowling, there were no best scores apart from this. But the team India maintains their best level with coordination.

Ravichandran Ashwin talks about the last game against with Pakistan as “We can't take too much of pressure. I know what kind of hype goes around it, what the media writes about it and how the people perceive it, but if we are going to buy into that and go into a game, it's going to put us on the back foot.”

The Sri Lankan's wicketkeeper and opening batsman, Dinesh Chandimal playing well in the last two matches against UAE and Bangladesh with the total score of 87 in this series. On bowling, apart from Malinga, Dushmantha Chameera and Nuwan Kulasekara are played their game as good. According to the history of T20Is about India Vs Sri Lanka; the Lankan's have won four matches and lost five matches from the ten.