This is a formal match today India vs UAE as India already into the Final. The knocked-out team UAE is going to face this Asia Cup T20 2016 Final Qualifying Team, India on this Thursday (March 3, 2016) at Dhaka. Unchangeable Batting line-up is there for India, and the team win's their all matches continuously without any lost. Especially, Virat Kohli is the top most T20Is batsman among all others in this year, 2016. UAE's bowling performance looks as fabulous against with Sri Lanka and Bangladesh, but their batting was always sitting down.

Man of the Match: Rohit Sharma (39 off 28 with Seven Fours and One Six)

Highlight: It is Seventh fastest chase in T20Is by balls remaining. 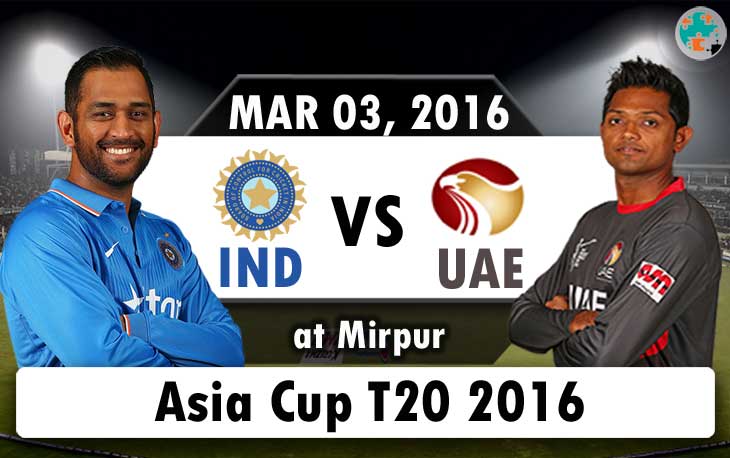 Both of the team will play their match without any pressure because of their current points table in the Asia Cup. In this game, there might be given a chance to Harbhajan Singh, Ajinkya Rahane, Bhuvneswar Kumar and Pawan Nagi. Dhoni may play today's match in top order because he faced only Nine balls in last three games this tournament and Nagi is there on world Cup squad is the great pin. Now, UAE has a free minded team without any tension about their win. So, they may play this match for boost-upping their experience on International matches.

Ashish Nehra, who took 12 wickets with the good economy rate on his last Nine T20Is games, is stepped into his 37th year within a short of a month. Bhuvaneshwar Kumar was the first choice for the team India on three years back. After that, he didn't perform well his swing balls. Now, it is good to take wickets against the weaker opponents like UAE. So, this match will look like a test to check the second line-up performance. Replacement Prediction: Harbhajan Sigh may play on Ashwin's place, Pawan Nagi may play on Jadeja's place, Rahane can be in the place of Dhawan.

The Indian Team Captain, MS Dhoni talks about the changes in this match as, “We will definitely make a few changes in the coming games. How many we can you know, that's something we will have to see. Because we still want the strength and the composition of the side to be very good.”

YUV with his fans, after the match against with Sri Lanka
(35 off 18 with Three sixes)

The perfect qualification is there for the team captain, Amjad Javed. He played their matches against with Sri Lanka, Pakistan and Bangladesh was made the viewers eyebrows up. He also played well on his batting so; it is better to see him on the top order. As we all known about the fact of UAE's bowling power. Even though, who win's all the three matches in this tournament will play their game against with who lost all the three matches in this tournament Today. India's top batting line-ups look much better than the teams Sri Lanka and Bangladesh. So, the bowlers of UAE will take more importance on their both catalogue.

India vs UAE Asia Cup Match 9 will be telecasted on