Mumbai: The Upcoming Three-match Test series against New Zealand will begin on September 22. So, the India squad announced its 15-member test team today on September 12, 2016. Only two members are out from the 17-member squad for (INDvNZ) West Indies tour series. 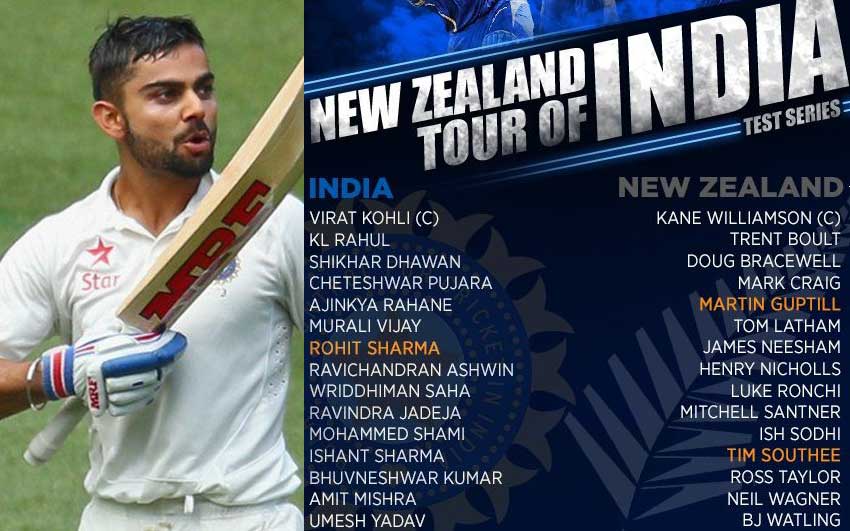 From the 17-member squad of West Indies Tour, the India team will go with 15-member squad to New Zealand. The all-rounder Stuart Binny and pacer Shardul Thakur has out from the list and remain as same. The Board of Control for Cricket in India (BCCI) selection panel has taken this decision today’s meeting in Mumbai.

The Wriddhiman Saha stands as the wicketkeeper. The opening lineup would be with Dhawan and Murali Vijay. The India team test quad middle order featured with Kohli, Ajinkya Rahane, K L Rahul, and Cheteshwar Pujara along with Rohit.

For the Pace attack, India had two players such as Mohammed Shami and Ishant Sharma. And, Amit Mishra and R Ashwin are there for the spin.

Chief selector Sandeep Patil said: Rohit is a fabulous player, wanted to give him a fair chance.

“We have stuck to the combination which has done very well. We were of the opinion that this was the best possible combination for New Zealand.”

“Everyone, from selectors, coaches, and the captain, felt that Rohit is a fabulous player and he needed a longer run.”

“We want him (Dhawan) to come good, not only him, we want all 15 to perform. We have faith in all 15,” he said about this while a reporter asked that why Dhawan was retained.

Patil said, “We are very happy with how K L Rahul has settled into the senior team. We have discussed not only Gautam but other seniors also. We have not forgotten the seniors, we discuss a lot of players… we have chosen only 15 players for this series but I am happy to say that we have a big pool of some 30 odd players.”