Gujarat Lions vs Royal Challengers Bangalore, GL vs RCB Live Score Updates: The IPL 2016 Qualifier Match 1 will be held at the location of M. Chinnaswamy Stadium, Bengaluru for GL vs RCB. Scroll down to get Full ScoreCard and Highlights of the GL vs RCB match. 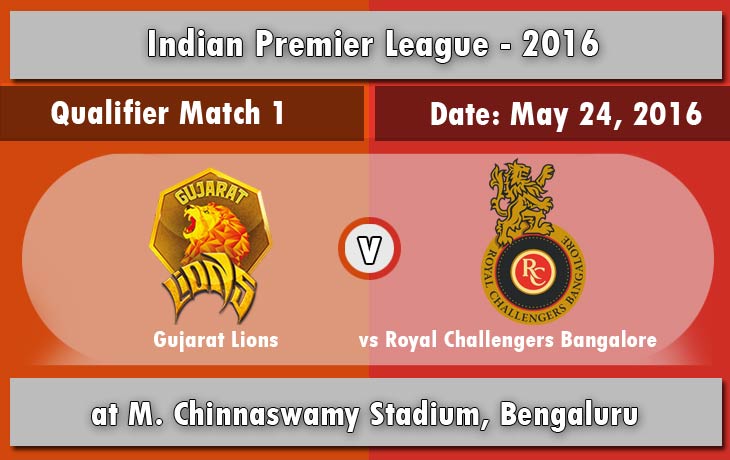 It is Qualifier Match 1 for Gujarat Lions (GL) and for Royal Challengers Bangalore (RCB). Both of the team were lead by their Captains as an opening batting.

Gujarat Lions (GL) played Fourteen Matches in this IPL 2016 season with the winning status of Nine Matches. The team, GL already fix their position in the top four from beginning of this IPL 2016. Their winning six of fist seven matches itself hold them in the top place on the IPL 2016 Points Table.

Recently, the team wins over the defending champion in 18 overs by 6 wickets. The team chased the score 172 in 18 overs.

Virat Kohli's most hot IPL season, he has been complete his four centuries, six half-centuries and hold his place on top position by his individual IPL 2016 score, 919 runs.