IPL Live score 2018 CSK vs KKR: This is the first game for Chennai Super Kings at their home ground. All their top order batsmen are failed to score big runs against Mumbai Indians. Hope, they all will do their best in this match. There was a record that CSK lost their final game against KKR in 2012. In that match, Chennai lost their match by five wickets, KKR scored 192 runs by giving five wickets.

These two teams were met each other in 16 matches, in that, CSK won 10 games and KKR won six. Today’s game will be their 17th match and it will begin at 8 pm local time. They won seven games against Kolkata at today’s venue, M A Chidambaram Stadium, Chennai.

CSK winning chance: After the win over to Mumbai Indians, the Yellow army are ready to play their first home fixture at Chennai. Bravo’s single-handed powerfull play helped the team’s first game win. Because of his batting, the team scored 166 runs from 118. Also, Kedar Jadhav’s final two boundaries helped their team’s win.

Because of his injury, unfortunately, he ruled out from today’s match. There is a chance for Murali Vijay’s opening in this match as a change of lineup. The team will come up with their updated playing 11 to give their better score than their first match. If so, there will be a chance for CSK’s win.

KKR winning chance: Captain and Tamil Nadu player Dinesh Karthik set to play his first match with CSK at his native ground. He played and did his job well against RCB with the partnership of Nitish Rana. Also, they have a big opener and important bowler Sunil Narine.

So, they looking comfortable with their playing XI and they may be had any minor change. Because of the local circumstance, it added another chance for KKR’s win. Though, today’s venue is KKR’s skipper’s hometown. 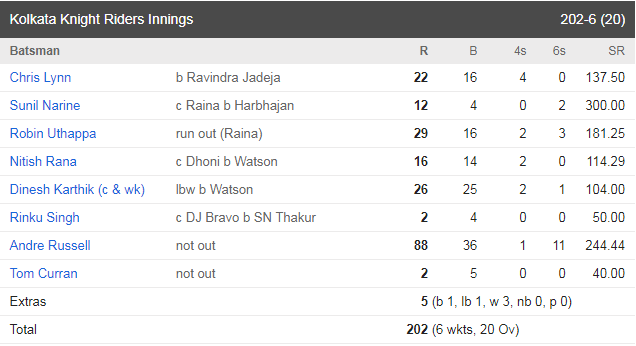 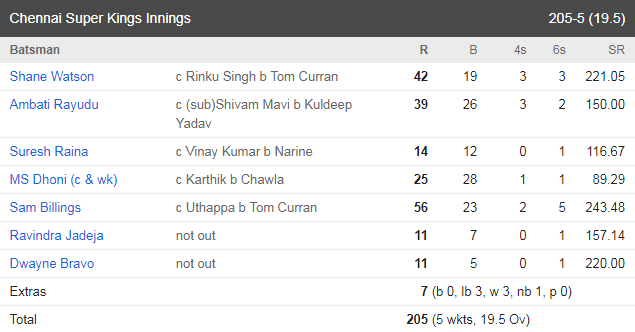 Chennai Super Kings fans felt sad about the behaviors of Politics in this sports. Though, few fans are keen to watch this match on both live at a venue and also on Television. Now, the fans and people of CSK and Tamil Nadu can watch this match in their native language Tamil in Star Sports 1 Tamil channel. Also, this tournament matches telecasting on totally six languages in India. Check and watch IPL 2018 Live Streaming completely.

CSK & KKR Key Batsmen: Though, important top order players are not performed well at Mumbai. They all looking to do great on their home ground. In that way, we can expect the best play from Raina and MSD. For KKR, Robin Uthappa, Sunil Narine, Chris Lynn, Russell and other top and middle orders are looking good as previously said.

CSK & KKR Key Bowlers: Like the ad of this IPL tournament, both of the team best bowlers. So, we can see some magic from Harbhajan Singh, Imran Tahir, Piyush Chawla, and Kuldeep Yadav.

Chennai Super Kings Next Match: After this second match of CSK, the team will travel to Mohali to face Kings XI Punjab on April 15, Sunday.