IPL Score KXIP vs DD: One of the biggest IPL season ever in the history of the tournament. It’s all because of the growth of technology and expectations of cricket fans. Chennai’s own and favourite man will play this season for Kings XI Punjab, also he will be the captain of the team. This is the first T20 match for R Ashwin as a captain, he starts this season against to the second top experienced captain of IPL, Delhi Daredevils’ Gautam Gambhir.

This is the first game of the second-day Indian Premier League (IPL) season 11. The game set to begin at 04:00 pm IST on Sunday at IS Bindra Stadium in Mohali. Both of these two teams (KXIP vs DD) are waiting for the title for ten years. Mumbai Indians, Kolkata Knight Riders, Chennai Super Kings are won most of IPL finals.

In the IPL 2017, Delhi Daredevils won six games in the league stage with eight losses. So, they can’t be placed as one of the teams in top four and failed to play in playoffs. While Gautam Gambhir will play with a new jersey after for Daredevils after having some great victories with KKR and company. KXIP also missed the last IPL Playoffs by a whisker, they at fifth position.

According to the analysis, today’s game will be a test match for both of the teams. An experienced captain will play for a new team. And an only bowler captain of this IPL will play his first match with the new team. But, KXIP looks fresh with more new players as the owners have retained only one player during the auction, Axar Patel. They are strong with the opening lineups, they have Chris Gayle, Karun Nair, KL Rahul, and Mayank Agarwa. Also, their middle order looks strong. So, there will be a chance for KXIP win today.

Update: Kings XI Punjab have won the toss and have opted to field (Bowl)

This is the first match for Ravichandran Ashwin as captain of T20 cricket. While DD’s skipper Gautam Gambhir played 123 IPL Twenty20 matches as captain. 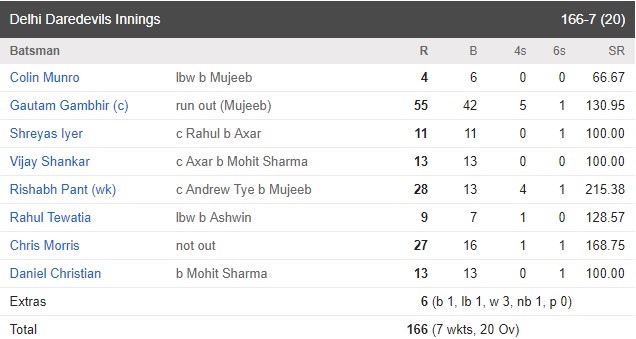 Totally, 20 matches were played against each other, in that, today’s home side have won 11 matches and Delhi have won nine games. It looks that KXIP having more power than DD in past. Also, they won four games at today’s venue at the IS Bindra Stadium in Mohali. But, Delhi Daredevils had just one win in five matches. This will be their 6th match at this venue in IPL tournament.

KXIP vs DD Key Bowlers: Andrew Tyecan, Ashwin, and Axar Patel are bowl for KXIP. They also have the youngest player of this IPL, Mujeeb ur Rahman. Liam Plunkett replaces Kagiso Rabada (who expected to be the great bowler of DD), Trent Boult, Chris Morris, and Mohammed Shami are the top bowlers in Daredevils.

Overall, this match will end with the final result of KXIP’s win.

It is time for you to vote here:

KXIP next Match: KXIP’s first away fixture against the Royal Challengers Bangalore on April 13, Friday.

DD next Match: DD’s second away match of the season will be the next against Rajasthan Royals in Jaipur on April 11, Wednesday.