Jayalalitha Final journey live: Tamil Nadu’s former Chief Minister and AIADMK’s chief J Jayalalitha passed away on Monday at 11:30 PM at the Apollo Hospital, Chennai. She turned 68. The Indian actress turned politician was admitted to the Apollo hospital on September 22 of this year. TN former Chief Minister hospitalized for 73 days and treated with the help of some specialists from All India Institute of Medical Sciences (AIIMS), New Delhi, and from London, among others.

She had thanked her people for their prayers on a few weeks ago while on the recovery path. She released the press release during that period as “I have taken a rebirth due to the prayers of the people and my party cadre. What can harm me when I have your love?” 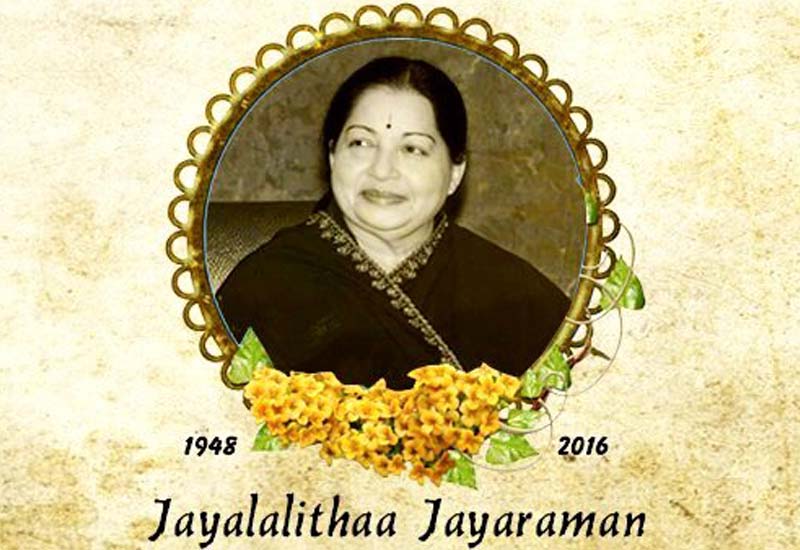 Scores of followers reached the Rajaji Hall where the body has been kept for public viewing and Celebs and Party Main Leaders visited to See Amma. The capital, Chennai remains shut down as Tamil Nadu mourns the death of its 18th chief minister, J Jayalalithaa. Her funeral is on Wednesday next to her mentor MGR’s memorial on Marina Beach.

Rajinikanth: check the image given below

Nikki Galrani: Loss of a true fighter,a woman who inspired many !!! You’ll live on in the hearts of ppl forever #RIPAmma #IronLady #Jayalalithaa

Dhanush: #RIPAmma. The end of THE most inspirational era of Tamilnadu Politics. You leave behind a vast vacuum. #IronLady. #Shattered #empty #darkday

Priyamani: TN looses one of its greatest and boldest woman leaders who ruled the cinema industry and politics as well!and end of an iconic era!#RIPAmma

Sibi Sathyaraj: The nation has lost a great leader!You will remain in our hearts forever!Thanks for al the sacrifices you made for us! #Ripamma

Viswanathan Anand: #Ripamma articulate & brave.She will be missed for her persona & charisma.As TN mourns its great daughter lets be together in its dark hour

Vijay Sethupathi: Very tragic, with a heavy heart we should accept that amma is no more,we are always indebt to you, gone not forgotten #RIPAmma our warrior

Kriti Kharbanda: #Ripamma a woman like no other. A true inspiration, the perfect role model.

Janani: Quintessence of class,fortitude,charisma and intelligence…. She will be missed forever! #RIPAmma

Madonna Sebastian: A great leader & a true fighter.
An inspiration to all.#RIPAmma

Prasanna: The inevitable had happened..unacceptable yet irrevocable end of an extraordinary life of this artist, a tall leader is unfortunate.#RIPAmma

Varu Sarathkumar: You will live in our hearts forever.. and be loved for eternity.. #RIPAmma

Allari Naresh: A journey that’s an inspiration to all. An iron lady for the people of TN, you will be missed. RIP. #RipAmma

Siddharth: It is the end of an era! Arguably the most unparalleled daughter of Tamil Nadu… #RIP #PuratchiThalaivi Honbl. Chief Minister #Jayalalithaa

Kalyanram Nandamuri: #RIPAmma Jayalalitha garu was one of the strongest leaders of our times.It truly is the end of an era.She will remain an inspiration to many

Sunil: Very sad to hear about the passing of CM Jayalalitha Garu . May her soul rest in peace!!! #RipAmma

Rahul Ravindran: Lest we forget her film career.. she was on the forefront of the first generation of female superstars. Path-maker in whatever she did. RIP As she often said so herself.. she was forced into two very high profile careers.. and how she left a mark on both!

Vishnu Manchu: A legendary actress, dynamic leader and a great human being, whose spirit will always remain in our hearts. #RIPAmma #Salute2Service

Varun Tej: Saddened to hear about the demise of the most inspirational woman #Jayalalithaa amma.. May your heart and soul find peace.

Sushanth A: RIP JayAMMA.. Queen of Cinema, Politics,… Life! What a strong lady and charismatic leader! She will live on in the hearts of millions

Actor Aadi: #Ripamma what a great leader end of a Iconic era .

Samantha Ruth Prabhu: Your life has been a series of fighting and winning.U gave us the will to fight and the hope that we can win. U will never die #AmmaForever

Tamannaah Bhatia: We’ve lost an inspiring woman who’s been a true fighter in every sense. She’ll always be remembered. May her soul rest in peace. #RipAmma

Rakul Preet Ringh: A woman of substance in real sense. You will be remembered forever. #legend #RIPJayalalitha ji #Amma

Dr Jayasudha: Rip my dearest super woman Jayalalitha Garu. You’ll always be with us through your inspiration. Nandri.

Trisha Krishnan: Rip my most favourite personD throne awaits U on d other side.Truly proud 2 hav studied in d same alumini n honoured 2 hav met u.#myAMMA❤️

Anjali: Hard 2 believe , Amma is no more the real leader, u nvr can b forgotten, always in our thoughts #IronLady #Ripamma

Hamsa Nandini: My condolences and respect to the CM of TN. A true example of strength of a women . #jayalalithaa #Ripamma

Surabhi: Deeply saddened to hear the loss of our loving Amma..A true leader..who will remain an inspiration to us all. #RIPJayalalitha #AmmaForever

Koratala Siva: Always wondered abt her polity,courage and leadership. A charismatic, true larger than life persona.J.jayalalitha.May her soul rest in peace

Krish Jagarlamudi:Saddened by the demise of an iconic figure of Indian politics n womanhood #Jayalalithaa

Gopi Mohan: Amma will forever be alive for the kind of work she did to the poor.Huge void in Tamil Politics.A Versatile Actress.A True Leader.#RIPamma

Kona Venkat: “Amma” is no more.. Strongest lady of our country.. No one can match her guts or glory great loss to poor and needy .. We miss u Amma…

SS Thaman: Honourable CM is no More My deepest Condolences dr. #jayalalithaa #ironladyoftn U will be in our hearts Fr ever An very emotional night #Rip