Chennai, TN: Tamil Nadu Chief Minister Jayalalithaa (known as Amma), who is undergoing treatment at Apollo Hospitals in Chennai has suffered a cardiac arrest. Jayalalithaa Heart Attack on Sunday evening as per the hospital’s statement.

“The honorable Chief Minister of Tamil Nadu, who is undergoing treatment at Apollo Hospitals, suffered a cardiac arrest this evening. She is being treated and monitored by a team of experts, including cardiologists, pulmonologist and critical care specialists,” Chief Operating Officer and head of the transformation of Apollo Hospital Dr. Subbaiah Viswanathan said in the bulletin.

CM Jayalalithaa was admitted and hospitalized on September 22, 2016, because of fever and dehydration. She was moved to ICU later and put on a ventilator because of lung congestion.
Home Minister of India Rajnath Singh spoke to Tamil Nadu’s Governor Mr. C Vidyasagar Rao her health.
The Apollo Hospital in Chennai has issued a medical bulletin saying Tamil Nadu Chief Minister Jayalalithaa suffered a cardiac arrest on Sunday evening and is being treated now.

Supporters of ‘Amma’ outside Apollo hospital in Chennai break down as they hear about CM Jayalalithaa Heart Attack this evening.

Earlier, Apollo Hospitals Chairman Dr. C Prathap Reddy said Jayalalithaa is in good health, and she was speaking using a valve attached to the tracheostomy tube. 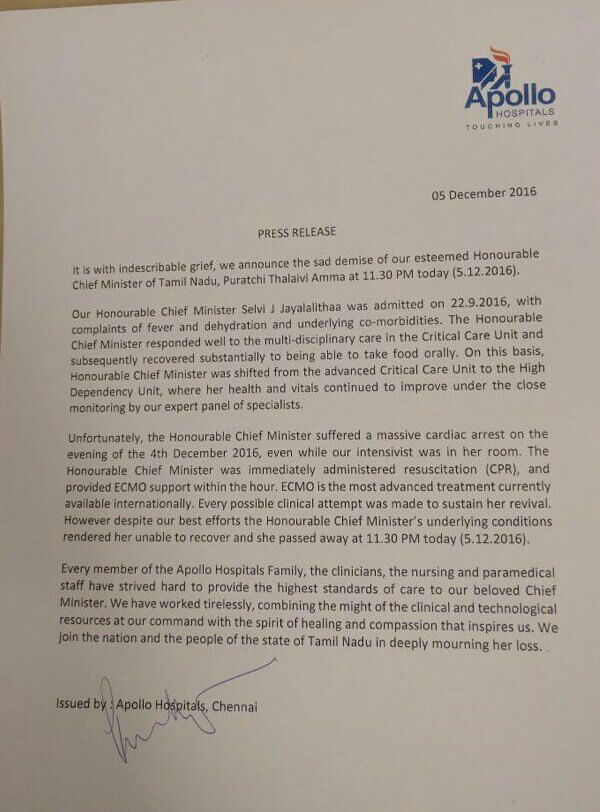 Jayalalithaa Passed away today yesterday at 11:30 PM at Chennai Apollo.