Kabali Movie Review, Rating, Live Audience Response, Box Office: The Most Wanted movie of this year in Indian Cinema. Superstar Talaivar as “Kabali”. The Movie created various records before of its release. The Premier shows of Kabali has been showed on all overseas and got positive reviews from all around the world. The Movie has released in India with the early morning special show at 4 PM. The Superstar of Production, Kalaipuli S. Thanu confirmed that it should be a record in Tamil and Indian Cinema Industry. Here we provided the Rajinikanth’s Kabali Review. (READ: Kabali Box Office Collection: Three days Report)

In Indian Cinema industry, Rajinikanth and Salman had huge fan followers from the beginning stage of cinema. The Rajinikanth fans are bought tickets for the first day and upcoming days shows as the three-time extra price of Salman’s Sultan. In Tamil Nadu, the maximum of theaters was sold the first-day ticket price as the Indian price, Rs. 350. Scroll down and read the Kabali Review, Rating, Live Audience Response and First-day Box Office. 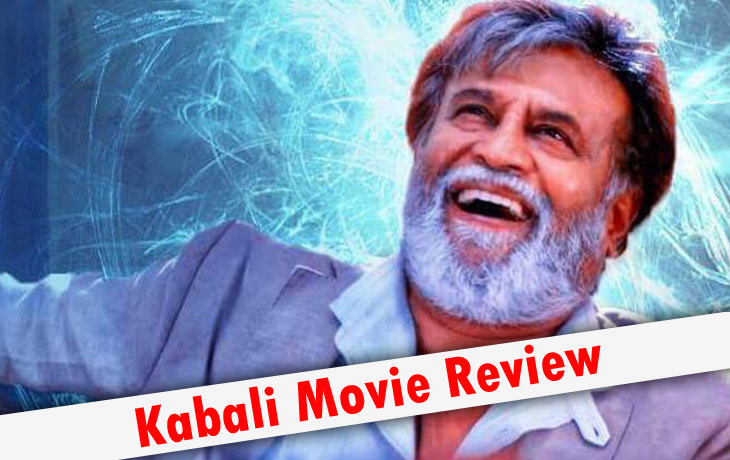 Kabali Synopsis: The Kabali story begins with the sad situation about Tamil people were abused physically along with the words by the concern authority people. So, the whole story of Kabali movie is based on the blackmail and annoyance threats towards Indian citizens.

In this Movie, we all already heard that the name of Rajinikanth is Kabali. His full name is Kabaleswaran. He is the Don of the City. He has done with all wrong things except the chapter of racial discrimination. The Screenplays plays a significant role in this story. At the age of 25, Kabali (Rajini) raised a voice against the concerned authority.

In India, the South Indian Cinema Industry is a huge one especially, Tamil Cinema (Kollywood). All the South Indian cinemas had the unbelievable scenes like stunts, dialogues, background scores, big fan followers, etc., Kabali (Superstar) has all these individuals as a pack.

The Kannada lead actor Kishore is the gangster of Malaysia along with the antagonist Winston Chao. As per the Kabali Posters and Teaser Trailers, Rajinikanth (Kabali) has a two roles. One is Young along with the Radhika Apte’s husband. Another one is a Don of Malaysia.

The Introduction of this movie with Neruppu Da song. Slow moving as average after the intro song. Kabaleeswaran flashback is present at the beginning portion (Kabali First half). The Young Kabali looks like Rajini’s vintage 1970’s. Veera Thurandhara song has placed in the first half itself. So, remaining second half may be with love portions along with Radhika Apte. Rajinikanth shifted to City Gangster by this Song and presented well screenplays. The First Half is Over as normal looks and also a good screen.

The Kabali Second Half seems good as our expectations. The Japanese gangster and Malaysian Gangster appeared on the screen.

The Direction portions are presented by the director Pa Ranjin as well and perfect. It is one of the Plus for the movie, Kabali. Screenplay and narration are very well. It is easy to get the story plot and screenplay easily; even you are not interested in watching the movie in theaters.

Obviously, it is the sad thing about the dubbing dialogues. But, in Tamil language, it shows the power of language by the Superstar. Each and every dialogue is more powerful.

Radhika Apte played very little portion but, it is good chemistry between Rajinikanth and Radhika on screen.

KRK: It’s interval n what an emotional film #Kabali! I am sure, it will be one of the biggest hit film of mega star Rajnikant.What a great film #Kabali! Full of emotions n patriotism. It’s going to be sure shot blockbuster all over south India. Salute to Rajnikant.
Can someone tell me name of the girl who played Rajnikant’s daughter in #Kabali ? She is really hot n sexy.
Hey @saidhanshika you have done great job in #Kabali n you are looking really hot there. Your neck tattoo! Uff Qyamat!

Kamalji: Dir @beemji has scripted #Kabali Flashback seq of Young #Rajinikanth very Powerful via his screenplay, “dialogues” looks & performance.#Kabali 1st Half Starts good (wid Okish BGM+Edit) to Super good (Screenplay) after Flashback till Intvl Most Wanted plot 100% Ranjit touch
#Kabali 2nd Half Starts slow… emotional and picks up to Merisal Climax. BGM & DOP superb Climax cud hv ended with celebration mood.
#Kabali Over all See d Best Acting side of the #Superstar with responsibile plot taken & Fair execution , but could have been better.
#Kabali Rajini Mass Mania missing (Not Classy too) Hot Frames (Esp Intro & 1H) are poured cold water by Poor BGM & at times abrupt edit
#Kabali Salute to Rajini sir for completely trusting Dir Ranjith & giving scope for others to perform. 2nd Half was a treat to me.

The Censor Board of India gave a “U” Certificate to this move. So, it is a Famil Entertainment. The Movie Runs 152 minutes on screen.