Kavan is the KV Anand’s directional film and written by a group of intelligent minds such as Subha, and Kabilan Vairamuthu along with KV Anand. The lead man of the film, Vijay Sethupathi had a very good year in 2016. He made all six films as hit and especially, his recent film Rekka is not related to the usual Vijay Sethupathi. Some of them liked and some disliked the film. Other than Rekka, all other films have separate places. He rejoined with Madonna Sebastian again after Kadhalum Kadandhu Pogum in 2016.

Kavan Movie Cast and Crew: An interesting filmmaker who turned as a director from Cinematographer created this new social drawback venture, Kavan. He was already presented Media related film, KO which marked as a huge blockbuster of the year. Now, he took the same plot but with different shades. In a recent interview, the lead actor Vijay Sethupathi said that it is very difficult to explain the story by words. The Second half of the film will tell you about the story and key facts of the film. The Mollywood Premam fame Madonna Sebastian is the female lead. However, the broad-minded T Rajender did a key role in this film. Vikranth, Chandini Tamilarasan, Pandiarajan, Jagan, Srinivasan, and others are the supporting actors.

The producers of this film was recommended the music director Hiphop Tamizha for this film. KV Anand also accepted him and he also replied with his grand numbers. Abinandhan Ramanujam is the cinematographer and Anthony as the editor of this film 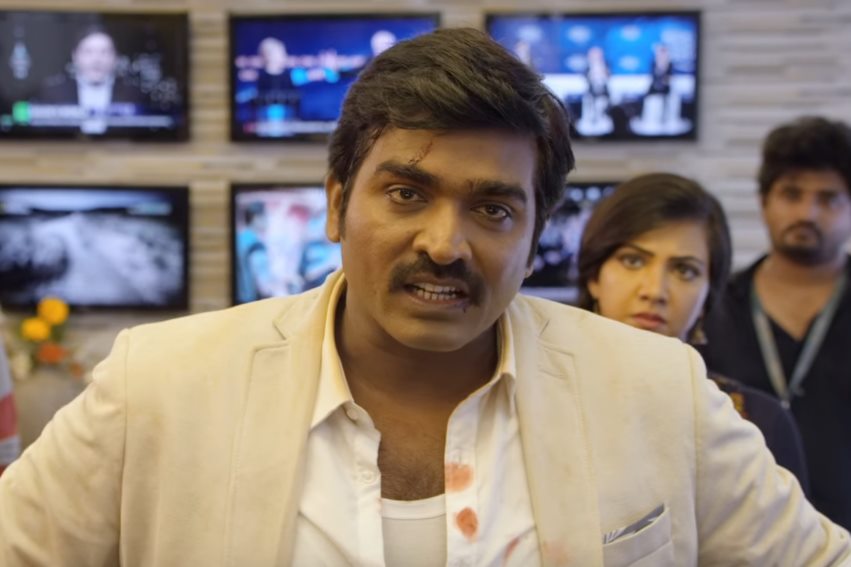 Kavan movie Box Office Expectations – Business: The producer of this film is not making their films as only with the motive of making money. Their history of productions is like an Art of Kollywood industry. Moreover, Kavan is the story of three passionate minded people. The Kavan trailer has talked about the current issues in Tamil Nadu. But, the director said that it is not only focused on current issues in Tamil Nadu. It is more than that. The normal minded Vijay Sethupathi keeps calm and away from social media and fans by respecting their families. He said that cinema is not an essential for everyone’s life. It is just entertainment. All the success minded people’s hard work will bring a huge positive vibe.

Kavan movie Story Synopsis: Kavan is a social thriller in which Vijay Sethupathi plays a reporter (Thilak) and Madonna is his colleague. Akashdeep is the villain in a film that tries to highlight the social responsibility of the media. The director KV Anand reveals the another side of the media. It also attempts to tell the power of media in current times. What happens when the hero decides to be part of change, is the crux of the story.

According to the Audience Response of Kavan movie; It is the mixed with the genre of Thriller, Romance, Comedy. The film contains the big social message about the corruption of the Media. Abinandhan Ramanujam’s Cinematography is appreciated for the first half of the film. Some of them are not fully happy about the performance of T Rajendar, but his climax portion gone viral over social media. It is another Vijay Sethupathi’s casual winning film. Power Star Srinivasan’s appearance is a big surprise and all other scenes of him are welcomed in this film. Let Go to the nearest Theatre and spend your time with this worth film Today..!

Hisham‏: #Kavan 1st half. Exposing the media well. Racy and thrilling. VJS , at his best. So far , so good.

Mithunrain‏: #kavan sama maass film from kvanand sir. clearly makes us understand how media manipulates us. terrific screenplay. love u sir
#kavan vjs has aced in his act super maass stylish hero making us enjoy and also think … nice comedy touches. #power scene is super power
#kavan effortlessly moves between love n masss scenes and also how our prsent corrupted society .it iis terrific maass masala
#kavan was a slap on arnabgoswamy on how to manipulate his slot as an anchor n create frenzy. vjs was the mature act in journalism n a gem
#kavan is the solution to our media n the act by vjs is the best icing in a long time. best enjoyment in a while n showed the craftmanship

Balaji Duraisamy: #Kavan – 1st half !! Entertaining so far. Scenes on trolling the media shows are really good. As usual #VijaySethupathi rocks!!! #Kavan – Good movie on the dark side of the media & their hunger for the TRP. A quality entertainer with no dull moment. Winner !!

Twitter Replies - No more @-names, can use 140 characters Now!