Kolkata Kight Riders vs Delhi Daredevils KKR vs DD Highlights: The Second Match of IPL 2016 was started with KKR’s Toss winning and the team requested their opponent to Bat first. So, Daredevils’ openers Mayank Agarwal and Quinton de Kock walked into the ground as first. But the team completed slipped even without reaching the total century. The Opponent, Riders has reached the half-century of the team score with the opener of Robin Uthappa and skipper Gautham Gambhir in 7.0 overs.  Scroll down to view the Full Scorecard of MI vs RSP. 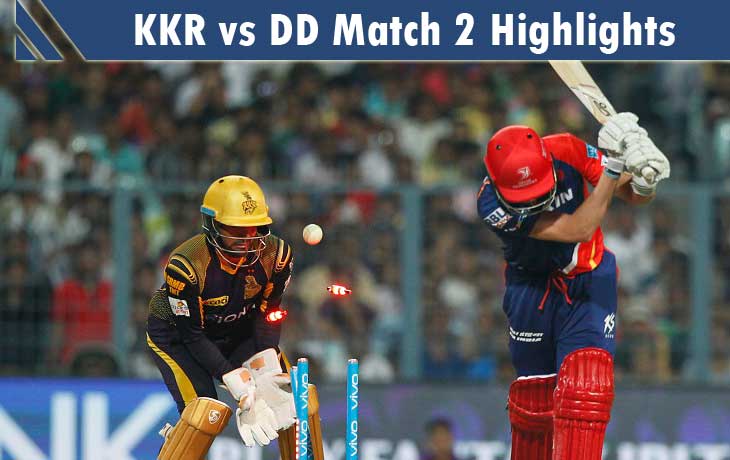 The total team players take their walkout from the ground within 15 balls, and no one crosses the score 20. Whereas, Quinton de Kock scored 17 runs with single six as a daredevils highest score. Then Sanju Samson scored 15 runs as second highest of the innings. Then remaining players are didn’t stand more time on the Kolkata ground.

According to the bowling of Kolkata Kight Riders, Andre Russell and Brad Hogg took three wickets each. Russell made the first wicket on the second over, and Shreyas Iyer was also returned to the pavilion without making a single run as a duck on the same over of the last ball. He took another one wicket, Agarwal on 4.5. Brad Hogg was also picked three wickets in his box with one of the lowest economy rate of the innings as 4.75. Chawla and Hastings are paired and took two wickets each. But Chawla used his four over by taking that two wickets. Whereas, Hasting used only 2.4 overs, and also he controlled the opponents run with his best economy rate, 2.25.

The opening batsman, Uthappa-Gambir joined their hands and made the team score as good without losing wickets until the total of 69. Then Uthappa caught by Morris on Mishra’s ninth over ball. Then Manish Pandya paired with the team skipper and made the victory on 14th over.

Morris and Coulter-Nile only used their full overs of Four without any wickets. But Morris concentrate on his ball and controlled the opponents score.

Stay tuned for updates about the ninth season of IPL 2016.