IPL live score 2018 KKR vs DD: Kolkata Knight Riders won 12 matches in their last overall 19 matches against Delhi Daredevils who all won only seven matches. In the KKR’s home venue at Eden Gardens, Knight Riders have won six games out of total seven matches over Daredevils (won one game).

On 16th April 2018, today’s 13th IPL match of this 11th season will be scheduled for Kolkata Knight Riders vs Delhi Daredevils. The match will take place at Eden Gardens in Kolkata and the time to get a start on 08:00 PM local (2:30 PM GMT).

KKR winning chance: After the winning match against Royal Challengers Bangalore in the first game of this tournament, they lost two consecutive games after that. They need to get back to their better performance now at home to give best on their next matches.

From the analysis of last matches against these two teams at this venue, KKR having more chance to win. In the last two matches against CSK and SRH, they performed well in their bowling, but they need more effort to do more on both batting and bowling.

DD winning chance: Because of the KKR’s smallest squad, DD has a chance to win this game. They lost their first two matches of this season, but they won a game against defending champions Mumbai Indians in their most-recent match. DD’s Jason Roy scored 91 runs against MI, who looking for the same performance today.

Update: Delhi Daredevils won the toss and opt to the field (bowl) 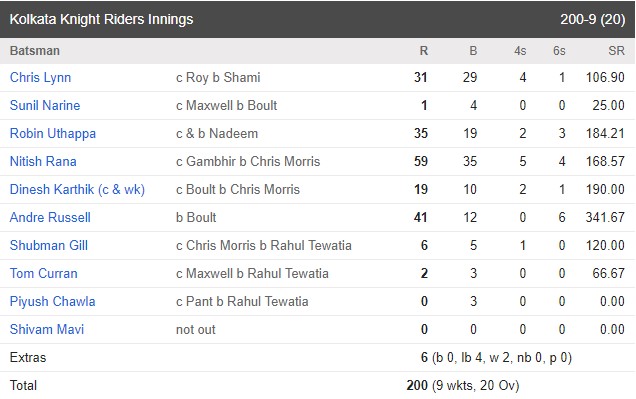 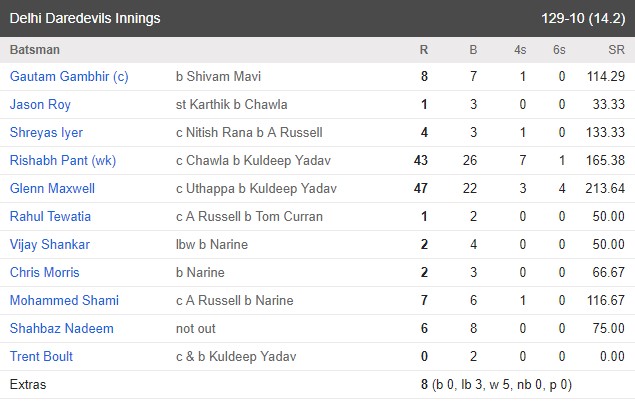 KKR & DD Key Batsmen: Home team have Sunil Narine if he stands for a while, then he scored some good numbers for his team. Otherwise, the team wasting time and wicket in the initial over of the game. Chris Lynn also one of the best in the top batting order, who reached and not touched 50 in his last match. Jason Roy, Rishabh Pant, and Glenn Maxwell are the having strike-rates over 140.

KKR & DD Key Bowlers: Obviously, KKR’s Sunil Narine will be the highlight of today’s match again as he controlled his opponent team’s total score in his over. Though, he has not collected more wickets in recent matches.

Kolkata Knight Riders Live match (next): KKR will play their fifth match against Rajasthan Royals on April 18 in Jaipur as an away game.

Delhi Daredevils Live match (next): DD take on Royal Challengers Bangalore in their next match at Garden City Bengaluru on April 21.