Kolkata Knight Riders vs Kings XI Punjab, KKR vs KXIP Live Score Updates: The 32nd Match of IPL 2016 will be held at the location of Eden Gardens, Kolkata for KKR vs KXIP on Wednesday 08:00 PM Indian Standard Time. Scroll down to get Full ScoreCard and Highlights of the KKR vs KXIP match.

Kings XI Punjab Won the Toss and Chose to Field 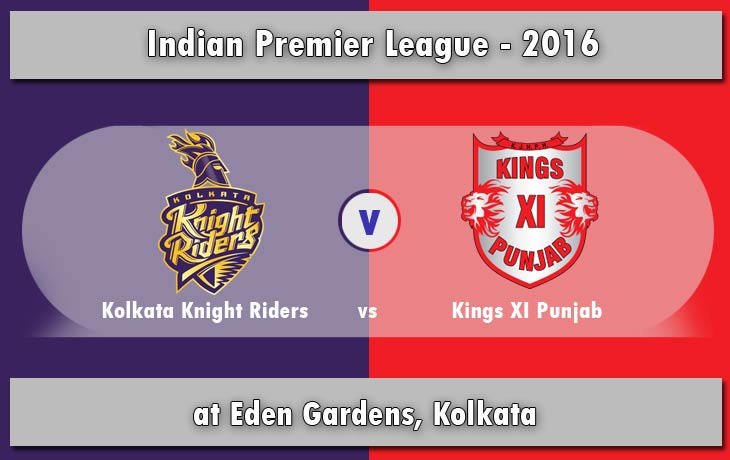 The Kolkata Knight Riders Stands at the Third position of the IPL 2016 Points Table. Their Opponent Kings XI Punjab were stands at the bottom of the points table with the two winnings.

Gautam Gambhir’s KKR has been played Eight Matches with the Five winnings. Their Last Match winning against with the Kohli’s RCB was done by the Middle bats man named Andre Russell and Yusuf Pathan. These Partnership were scored above 90 runs on that Match and Chased the target RCB’s 186.

Manish Pandey returns to his team after the space of two Matches. Suryakumar Yadav, Russell and Pathan are the important key players of this team, while the top partnership’s may failed.

Glenn Maxwell and David Miller are the key feature of the middle order line-up’s. The new skipper, Murali Vijay may handle this team with respect to the players performance. Last Match against with Gujarat Lions, the team KXIP defeated their opponent Lions by 23 runs.

In this Match was also begin with the Toss winning, and the KXIP team skipper chosen the Bowling as first.

The Opening batsman including Murali Vijay, Manan Vohra, and Marcus Stoinis are contribute their skills for their team winning as their last Match against with Lions.