Mumbai Indians won the TOSS and Chose to BOWL First

Get the ScoreCard of this Match KKR vs MI Here 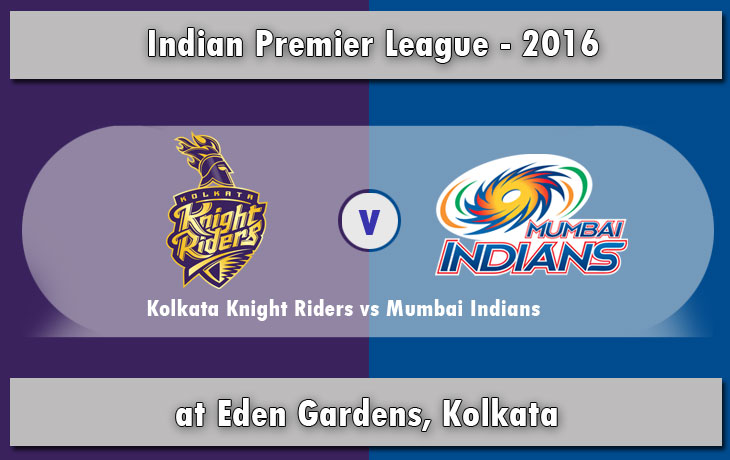 The Mumbai Indian skipper, Rohit Sharma scored 98* and one 50 in his last two IPL T20 innings at the Eden Ground. In the first match of this IPL starts with the winning status of RPS, whereas the Mumbai Indians is the opponent for Pune Supergiants. After that day, KKR picked their victory against with Daredevils.

Kolkata Knight Riders are getting the extra boost up with the help of Sunil Narine. He is absent in the first match against with Delhi Daredevils. Here we need to remember that, Narine is the important key for KKR, he was playing for the Kolkata Knight Riders on last four years, in that, the team wins the championship as a two times on 2012 and 2014.

Brad Hogg is another bowler who picks the 3 wickets by giving just 19 runs in the last match with DD and stopped the total score like 98 in the over of 17.4. So, the captain of KKR will face the little mashups on playing 11 of their in today’s match.

The team, Kolkata Knight Riders will play their game again on their home ground on next month of May 4th, 2016. So it is the last game for KKR’s team with their most fans cheers up.

KKR has 80% win rate when chasing at Eden Gardens. Should #KKR bat or bowl first against #MI? #KKRStats #KKRvsMI

In the First match against with Pune Supergiants, team struggle with the top order battings with the score of 30 in five overs and lost first four wickets. Also, they didn’t play their match as well up to 16th over of the innings.

We need to note that, the team was formed with the two legendaries such as Sachin Tendulkar and Ricky Ponting. And from the last few matches, Rohit Sharma take over the team with the position as skipper.

The new Indian colors, Jasprit Bumrah and Hardik Pandy both are placed on this team, but they also failed to score Big runs in the last match. Even the Pandya promoted on the position no. 3, but he scored only 9 runs. And the Bumrah conceding 30 runs without picked any wickets.

There might be some changes on the playing XI of MI with the wicketkeeper of Parthiv Patel and New Zealand’s all-rounder Corey Anderson instead of Mitchell McClenaghan. So the team should rethink about their batting and also the bowling strategy to win the Eden game today.

Rohit Sharma had said, “Hopefully, we will go back and come back with a positive frame of mind. Never thought the ball would do that much having played a lot of cricket here. They swung it a lot and our shot selection wasn’t great. We have good memories in Kolkata. It’s just the start of the tournament, no need to panic.”